Clothing industry is linked to the tailoring and embroidery crafts, which were traditionally famous in Lebanon, and regressed later due to the spread of the factory tailored clothes. Currently this craft evolved to conform to modern fashion, and its popularity surpassed local markets.

It is of two types:

This craft is linked to local heritage and inherited technologies, from the type of fabric (velvet, silk, linen, muslin, lace) to the embroidery, trimmings and crochet made by housewives and associations concerned with the empowerment of women.

The folk costumes handicraft has been active since the sixties of the twentieth century with the establishment of the Lebanese artisanal shops supported by the Ministry of Social Affairs. The designed costumes are inspired from the local heritage in a chic and elegant way which re-attracted the rich consumers.

Work in this sector has changed. A piece is no longer designed and produced on demand by the craftsman alone (the traditional way), today there is a designer, a manufacturer, and a seller. This change introduced new craftsmen, not belonging to families who worked traditionally in this industry, into the field of folk costumes making. Young generation of innovators and fashion lovers were encouraged to learn this craft like Mrs. Soraya Baba, who started designing and making in her forties and became famous inside Lebanon and abroad for her skill and creativity.

Hobby to a folk costumes design 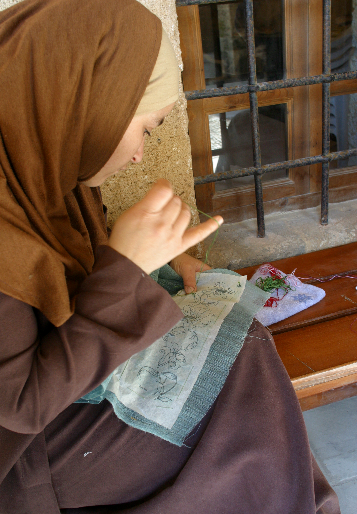 Over Lebanon), trimmings at the shawl border