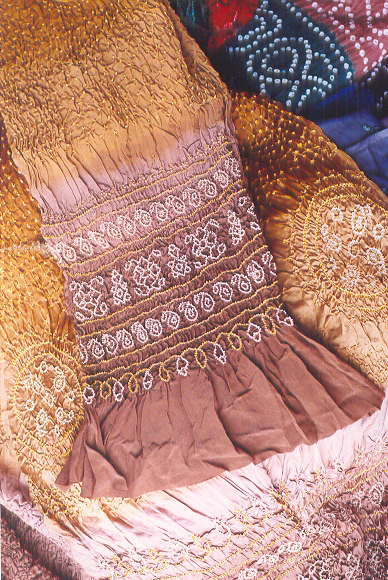 Mural paintings on the rock cut cave monasteries at Ajanta (second to fifth centuries CE) depict figures clothed in speckled textiles. These are evidence of a long tradition of patterning through tying and dyeing . Variously called bandhej in Gujarat, bandhini in Rajasthan and Madhya Pradesh and sungadi in Tamil Nadu, the terms are derived from the Sanskrit word for “tying up.” While the techniques used are relatively similar, each centre is differentiated by its own practices of patterning and colour usage that have been customised for their traditional clientele. 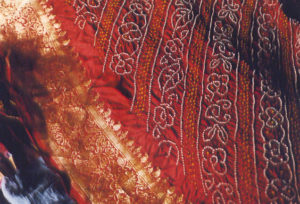 Traditional bandhani in Rajasthan and bandhej in Gujarat can be seen on turbans, head-mantles, full gathered skirts—ghagara and saris. The colours and patterns worn are identifiers of community, marital status, position and occupation. One such example is of the auspicious bright yellow head-mantles with wide red borders and red central dots that are only donned by those women of the Bishnoi community who have borne male heirs. In Indore, Madhya Pradesh bandhani is less widespread. It is confined to head-mantles and lugdas (the sari-like dress of the Jat, Chamar and Banjara tribal community).

The sungadi tradition of Tamil Nadu is practiced only in the town of Madurai by descendants of Gujarati bandhej craftspersons. Craftspersons adapt the craft to the woven cotton saris of the area. They knot and dye the borders and end-piece (pallu) in contrasting shades. 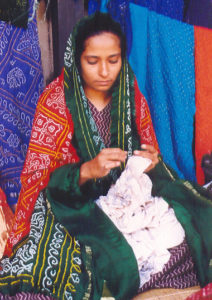 These dot like patterns are created by tying the textile into knots with thread or by knotting in a grain of rice. The tied areas resist the penetration of dyes in the protected spaces thus forming dots. The designs are created by laying the dots in shapes as varied as flowers and birds to geometrics, by varying knot sizes. It creates overlays by adding on colors through multiple dying.

The continuing popularity of the tie and dyed textiles is seen by its presence on haute couture lines and its coverage in fashion magazines with designs adapting to contemporary markets. 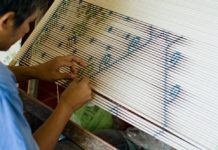