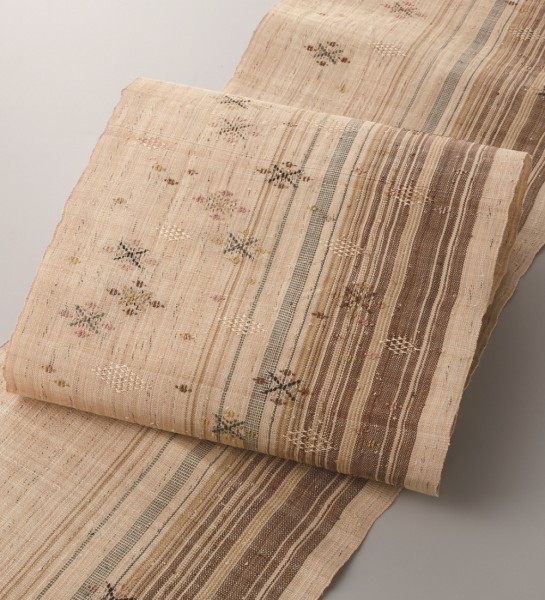 It seems that banana fibre cloth was already being made around the thirteenth century, but it was much later that it became popular. In the old days, banana trees were planted in gardens and fields, and the womenfolk of a family wove it into fabric for home use. Silk and cotton became much more readily available during the nineteenth century, but people still enjoyed wearing banana fibre cloth. Kijoka no Bashofu, which carries on these traditions, was designated as a cultural property by the Prefecture in 1972 and two years later in 1974, it was made an important intangible cultural property by the nation.

Woven from fibres taken from the banana tree, banana fibre cloth is highly representative of the weaving of Okinawa. It was very popular for making a piece of summer-weight formal dress called kamishimo in the Edo period (1600-1868) and being light and comfortable to wear, it is still a great favourite with many people today for kimono in the height of summer. But kimono is not its only use. Some are made into obi, while other pieces make fine cushion covers. Ties, bags and table centres are also made of this engaging cloth, which also makes fine split curtains or noren.

Bashofu is a typical clothing of Okinawa made from fibres stripped from itobasho (musa liukiuensis). It was popular as summer clothing during Edo period. It is still popular as summertime kimono as they are light and smooth touched.

Stems of three-year-old itobasho are split into four parts, boiled and removed any impurities before fibres are taken out. The fibres are tied with a weaver’s knot to make them longer as each fibre is less than one meter long. The threads are twisted and ikat dyed with natural dyes. After it is hand woven, they are refined by wood ash, washed with rice vinegar and finished by stretching using the hand. It takes a long time from the cultivation of Itobasho to completion of fabrics.