Traditional bronze-casting of Vietnam has been around for thousands of years. There are bronze drums over 2,000 years old. During its historical development, bronze casting foundry produced  bells and statues for religious practices as well as daily tools like pots and candlesticks. Nowadays, bronze casting is still developing. There are more than sixty bronze-casting villages.

In previous years, casting was able to draw from older bronze objects. Now the raw materials are imported. Despite different techniques of different artisans, the casting techniques overall are similar. First, a model is created with wood or plaster. Then clay is mixed with husk and charcoal to mould the rim of the model. The mould is over divided into pieces and then fitted accordingly. Next is to fill up soil into the mould , while casting the product is empty. When the core is dry, it is trimmed down according to the thickness of the intended cast product. 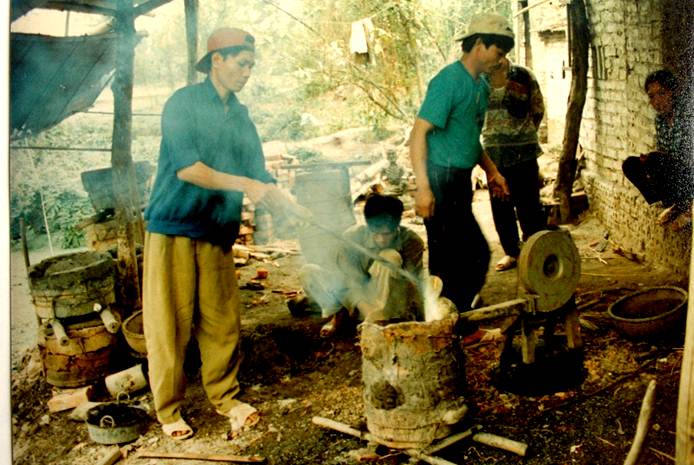 Currently in Vietnam, three different types of foundry are mostly used. Many places build ovens which are placed inside a big copper pot. The molten copper is ladled or poured into a smaller pot, then poured into moulds. Many places do not have ovens, yet use many small pots, each pot contains about 25-30 kg of copper. Coal is placed first. When it is red hot the copper is dropped from above. When the end of molten copper sinks down, the charcoal is floated above, then one simply brushes off charcoal  and pours the melted copper into the moulds. Number of pots is calculated corresponding to the required casting copper. If the makers can continuously pour the copper, a giant statue weighed in tons of kilograms as a whole can be successfully cast. Dai Bai Village, in specific, has special soil so that people here usually mould the copper cooking pots shaped bullet-like, each pot containing 5-10 kg. In each oven, they organise pots alongside each other; when the copper is melted, they will pick up each pot out and pour the copper into the moulds. When the copper is hotly melted, the pots will be melted too, but not broken completely. When the whole objects are cooled down, they break the mould to remove the object, carve off all excess soil, then continue grind burrs and repair anything wrong.