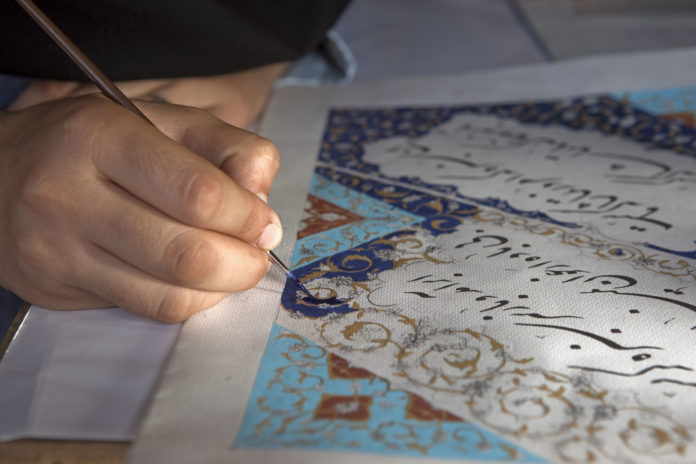 Calligraphy is one of the most widely-heralded artistic traditions in Afghanistan, where its close associations with both religious and secular literature elevate it, in social status, above all other arts. The chain of transmission of knowledge from calligraphy master to pupil is especially revered.

The key raw materials for calligraphy include the qalam (pen), traditionally crafted from a dried reed and cut with an oblique tip according to the particular style of calligraphy practiced. In Persian art, the lauded “six pens” include a wide variety of calligraphic styles: from the elegant, curved thuluth script frequently used in architectural decorations as well as the headings of Qur’an chapters, to the clear naskh script often chosen for manuscripts. The special paper used (vasli) is composed of several sheets of paper glued together with rice paste. The surface is then burnished for days with a smooth stone. Traditionally, each ustad (master) prepares his or her own pens, papers, and inks. Today, some Afghan calligraphers prefer to use imported materials from fine arts suppliers in India or Europe.

The creation of calligraphic works requires careful planning by the ustad. He or she will take into account the size of the paper, any illuminated borders or headings, and the length of the passage to be written. They will then carefully calibrate the composition based on these factors. Although calligraphy is traditionally done on paper, contemporary calligraphers also paint on fabric, wood, or canvas.

Contemporary calligraphy is thriving in Afghanistan, with a number of recent international exhibitions and publications in Kabul and abroad. These include exhibitions in Manama, Bahrain; Doha, Qatar; and Washington, DC, among others, as well as entries at the Venice Biennale. Noted calligrapher Mohammad Mehdi Banai, whose work has been exhibited internationally in the Middle East, Europe and Canada, is a senior instructor of Calligraphy and Miniature Painting at the Turquoise Mountain Institute in Kabul, where he has collaborated with students on works exhibited in Qatar, the UK, and the USA. 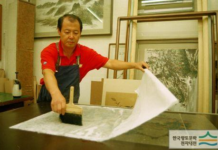 Baecheopjang (preserving a painting or calligraphy)