Buddha statues have great significance among Buddhists, representing the Buddha himself as well as his teachings. These statues bear ideal features that are “characteristics of a great man” (mahaburutlaksana). According to the Brahmin belief and the Sutta Pitaka, the man who will be a great king in both secular and dharma worlds must have 32 signs of a great man and 80 minor characteristics.

According to the ancient method for making a Buddha statue, a model is made of a particular formula consisting of three parts of sand and one part of clay. The old term for clay that has gone through one round of trampling was one kra bueang. Details are made after the model is covered with wax. Cha nuan kang pla (treelike wax structure) is placed on the model to create a pathway for molten gold to flow through. Water mixed with cow dung that has been filtered and mixed with soil water is then applied around five times, each time left to dry first. Nails are hammered in to secure the model. Then, din is applied (white clay mixed with sand and water) and then din kae (clay mixed with sand and water). The whole structure is wrapped with metal straps, followed by another layer of clay. The mould is placed upside down on a platform and supported by metal bars and a kiln is built around the mould. The mould is fired to get rid of the wax and the humidity and molten gold is continuously poured in. Once the gold is set, the statue is polished with felt buffs and the roots of mangrove apple. The final touch is the gilded lacquer application. This technique is still used among the sculptors who work in Thailand. 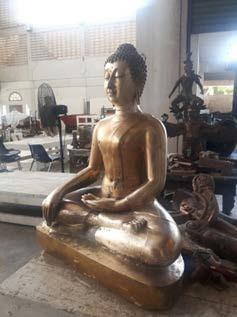 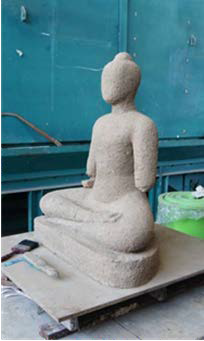