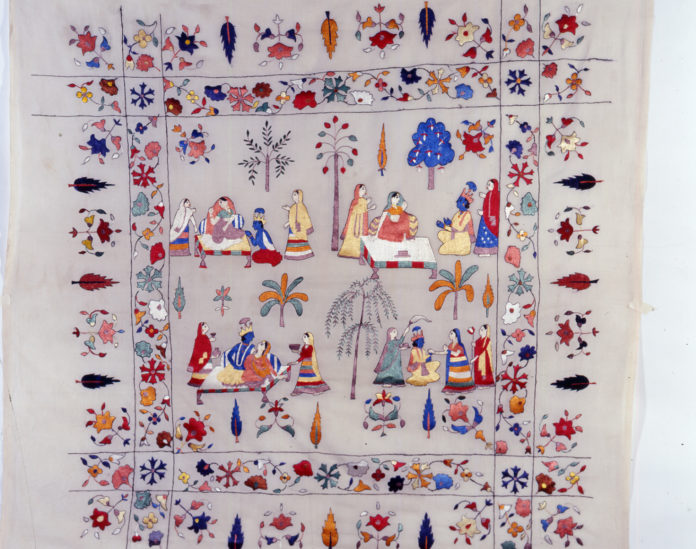 In the erstwhile princely Pahari hill states of Chamba, Kangra and Basohli, women embroidered themes that mirrored the style and composition of the courtly Pahari miniature paintings of the region. Formatted usually as square kerchiefs or rumals, legend has it that the oldest dated piece was embroidered by Bebe Nanki, the sister of the founder of the Sikh religion Guru Nanak (1469 – 1539). Embroidered by the ladies of the court, the art form flourished from the reign of Raja Umed Singh of Chamba (1748-68) onwards. It was, however, during the rule of Raja Bhuri Singh (1904-1919), the great patron of the arts, that the rumal came to be recognised and valued as a museum piece.

The embroidered rumals were Inspired by the region’s miniature traditions and the murals in the Rang Mahal palace in Chamba. They were used as coverings for gifts and offerings to the deities, among other uses. The illustrations of the theme to be embroidered were rendered in a skilled hand, perhaps by the miniature artists themselves, onto fine hand spun off-white muslin. They used the do-rukha (double satin stitch) to portray episodes from the lives of Hindu gods and goddesses, myths and epics, peopled with flora and fauna. This was reflected similarly on both sides of the rumal filled the embroidery. Using untwisted silk skeins in a wide color palette, the figures were defined in dandi tanka or the stem stitch in black outline thread.  Other stitches used included the long and short stitch, brick stitch, criss-cross stitch and backstitch.

With the decline of patronage by the late twentieth century, the Chamba rumal embroidery had altered to an unrecognisable form. The fineness and sophistication of the tradition has been lost. In the early 1990s, a revival project initiated by the Delhi Crafts Council has worked to bring the craft back to its original inspiration.