The fibre extracted from the husk of the coconut known as coir has been the raw material for making yarns and ropes in Sri Lanka and some parts of southern India since ancient times. The word coir has derived from the Malayalam word kayar, which means the code. Coir yarns have been in use for so long due to its relative waterproof quality and resistance to damage by seawater. In Sinhala language, coconut fibres are known as pol kohu, and the yarns made of it as kohu lanu. 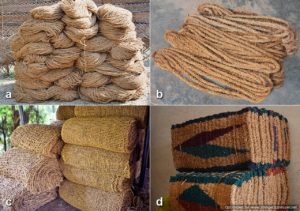 The craft would have been in practice in coconut growing regions of South Asia, Southeast Asia or in the Pacific islands for many centuries. However, it is difficult to ascertain a specific place of its origin.

Coir is the only material that is used to make coir yarns or coir ropes. A process called retting is used to extract the fibre from the husk. The ripe husks are kept under water along river banks or pools for 2-3 months to allow naturally occurring microbes to decompose the pith part of the husk. Nowadays, crushing machines are used to soften the husks prior to retting, so that decomposition time can be shortened. The retted husks are beaten by workers using wooden mallets to extract the fibers from the pith and the outer skin. The bristle fibres for making yarns are separated from shorter and weaker fibres (mattress fibres) through combing by hand or tumbling in a mechanically driven perforated drum.

The bristle fibres are twisted into strands that are spun by hand, hand-operated spinning wheels, or fully automated mechanical methods to make 2-ply yarns. In order to make ropes, the desired number of coir strands are attached to a wheel that is turned by hand or by mechanical means.

Sri Lanka and India are the world’s largest coir yarn producers, and the yarns made in both countries look similar in appearance, structure, and technical character. No specific cultural elements or practices are associated with the craft.

Coir yarns are a utilitarian material needed by everybody in society for numerous purposes with no particular cultural attachments. It is also used as a raw material to make several other utilitarian products. Using a simple loom, coir yarns are woven in different densities, consistencies, and thickness to make mats, floor covers and nets for agricultural purposes etc. Making of colourful door-mats using coir yarns in combination of other materials has become a popular value-added secondary craft in present times.

Several thousands of people are involved in the production of coir yarns either as a cottage industry where everything is done manually, or in small to medium sized “factories” where the craft is partially mechanised.

The craft is concentrated along the southern coastal area and in the North-Western Province where coconut is cultivated as the principal economic crop.