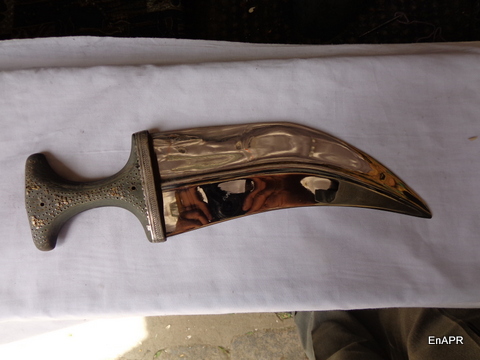 Aljampieya (dagger craft) has been practiced in Yemen since the BC era. It is worn throughout Yemen as a symbol of masculine identity. Aljampieya consists of three elements.

The head is considered the most important part of aljampieya. It is made from horn that is carved and polished. The older the horn, the higher the price.

The manufacturing uses basic simple tools to sculpt and form the horn. It is decorated by fixing two circular golden pieces on the front of the horn, one at the top and the other at the bottom, by using nails to fix them tight to the back. The shape of the head usually takes shape of the letter “T”. The head is inlaid with thin porous of pure silver loaded in tiny holes. The handicraft identifies the distribution of the holes on the horn starting from the top till the bottom on an ornamental way. It is called among handicrafts “alzara’a” which has the meaning of “planting”. Each handicraft has his own style in “planting” the head and it becomes his own stamp of identity. 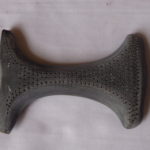 The second element is “almabsam” which means the “mouthpiece”. It is a rectangular strip of pure silver and it may be coated in gold if the aljampieya is expensive. It is fixed at the bottom of the head like a brace.

Finally alnaslah is the dagger. It is manufactured with strong metal on the shape of a dagger without a handgrip. The width from the top is around 8cm and the length is around 15cm. At the right top of it, there is a flatted metal “tongue” shape around 5cm length which is fixed on the head using a gluing material called allok. It is at the center of Aljampieya. The dagger has the curve shape which bends proportionally and at the end it is sharp like a knife.

Aljampieya is not considered as complementary decoration to the traditional costumes, but it is connected to many Yemeni traditions, norms and lore. It is also used to reach to solutions between litigants as it is put as a pledge until the dispute is resolved. The most famous family that is still working in this craft is Alozairy.