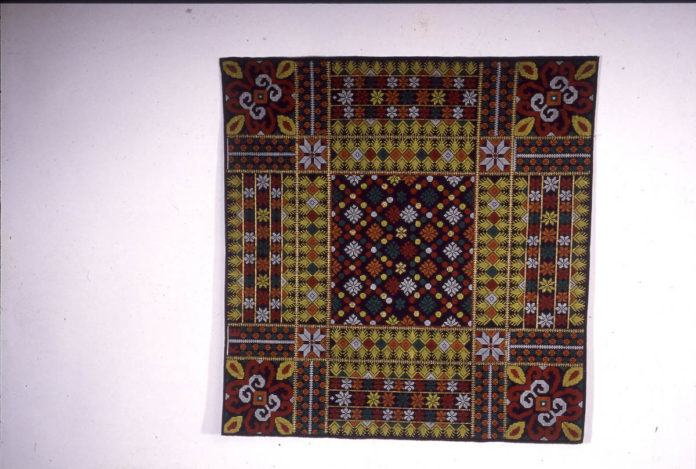 The dastar, one of Sabah’s most iconic textiles, is worn as a headdress by many indigenous people as part of their costume. Production was previously exclusive to the Iranun and Bajau weavers of Kota Belud, who wove for their own use and to barter at the local weekly markets (tamu). High demand for the dastar in recent years has transformed this home-based spare-time activity into a full-time cottage craft industry with training given also to weavers from other indigenous groups.

The dastar is a square metre piece of cloth, traditionally woven on a backstrap or body-tension loom. Warp threads are evenly looped in a continuous spiral over the warp beam tied to a supporting horizontal beam. The breast beam is tied to the backstrap. The shed and heddle sticks inserted between the warp threads are raised to enable shuttling of the weft threads through the vertical warp threads to create the cloth and the patterns and motifs using the supplementary weft technique. Pedal looms have now been introduced to assist rural weavers increase production and earnings.

Defining characteristics of this cloth are the rich colours and combinations of motifs, derived from familiar objects, plants and animals in the weavers’ environment. Iranun weavers traditionally produce two types of dastar cloth, the tubao, primarily made of black warp threads with multicoloured weft threads used to create elaborate motifs and patterns, and the siambitan, predominantly a red fabric that uses the complex tapestry weave technique to create an elaborate cloth worn as a headdress, shoulder scarf or waist sash. Expert weavers sometimes combine the two techniques in a dastar called siambitan sauluh, in which the siambitan forms a central square surrounded by woven fabric using supplementary wefts.

The way the dastar is folded and worn on the head varies from one district and group to another. Visible symbols of ethnic identity, they are variously called tanjak (Iranun), podong (Bajau), sigal or sigah (Kadazandusun) and sundi (Lotud). Among the Dusun Tindal of Kota Belud, the cloth is folded and worn diagonally over the shoulder and chest of a bridal couple. Bajau dastar, containing images of horses and riders inspired by their equestrian traditions, are worn as headdresses by horsemen, and when reversed as headpieces for bridegrooms.