The art of making felt and felt carpets among Kyrgyz people has ancient historical roots dating back to the era of the early nomads, the first century BC. Felt carpets were made for insulation and decoration of the home. They carried household, aesthetic, magical and marking (indicating the areal and class affiliation) function, symbolized the concept of prosperity, peace and tranquility.

Felt carpets are made of local sheep’s wool of autumn shearing and divided into ala-kiyiz (motley felt) and shyrdak (quilted carpet).

Ala-kiyiz is made by the technique of tipping a coloured pattern into a one-colour black background. It gives to ala-kiyiz unpredictable, indistinct shapes of ornament, watercolour softness, complex and integral colour harmony.

In shyrdak technique, the dyed felt is cut into pieces and folded in pairs, combining two pieces of contrasting colours, then cutting patterns and sewing so that the background and pattern are of different colour parts. Thus, complete equality of background and pattern is achieved. Shyrdak is distinguished by a clear pattern, a highlighted contour, colour contrast.

Felt carpets have always been an important component of the decoration of the yurt, the nomadic dwelling of Kyrgyz, and corresponded to its size. As a rule, carpets had the form of a rectangle, the long side of which was usually equal to two short ones: 2×4 meters or 1.5×3 meters.

The process of making felt and felt carpets was a socialising, unifying factor. In this process, all family members and often relatives and neighbors, took part. During the joint work, the experience and skills were transmitted from the older generation to youth in an interactive way.

Men sheared sheep, chopped firewood, and brought water. Children of artisans helped in stirring up the wool, rolling and felting. Women were engaged in dyeing, preparing yarn, patterning and finishing the felt carpets.

Traditionally, felt carpets were not intended for sale, they were passed down from generation to generation, playing the sacred role of family and ancestral memory of the mother. Therefore, their ornamentation was marked by the individuality of the women who created them. In the list of the bride’s dowry, felt carpets traditionally stood in the front row.

Ornament in felt carpet played a key role, visualising good wishes or blessing of the master. By ornament, the woman sent a kind of message to a specific addressee, mostly a daughter, or descendants, children or grandchildren. Ornamental motifs used in felt carpets are divided into groups: geometrical, zoomorphic and botanical. Geometrical motifs consist of straight, zigzag and wavy lines, various geometrical figures. These motifs are among the most ancient, their semantics associated with universe and natural phenomena. The most frequently encountered zoomorphic motifs include muyuz (horn), syngan muyuz (broken horn), karga tyrmak (crow’s claw) and it kuiruk (dog’s tail). They signify prosperity, wealth and also considered to be a powerful protection symbols. 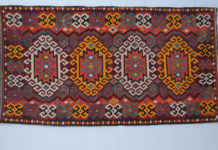