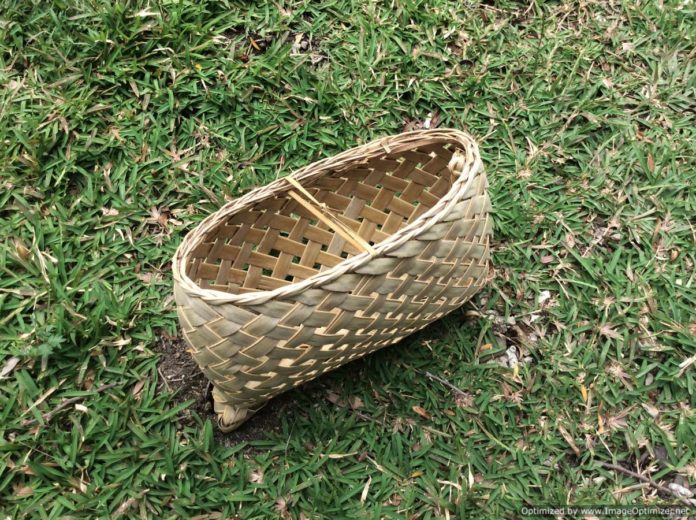 The weaving of plant fibres is a significant contemporary artistic practice in New Caledonia. It is traditionally used for making many different ceremonial items and everyday objects for harvesting, transporting, arranging and storing food products and goods, for use in the home, as ornamentation or for fishing.

This practice, which is a cultural symbol and, at the same time, a living art and economic resource, testifies to a technical and stylistic diversity. It is manifest through a great many objects of varying shapes and sizes that have been woven, knotted and tied using leaves, stems, roots, creepers and plant fibres.

The Cocos nucifera (coconut) and Pandanus tectorius (pandanus) are the main plant species used for woven basketwork and for putting together items that may be short-lived or long-lasting, such as mats, baskets, bags, dishes, fans and decorative items. Juncus usitatus (rushes) and Lepidosperma perteres (sedges) are sometimes used in certain regions. These various types of objects, materials and motifs are sometimes decorated using dyes made from plant extracts, such as mangrove roots, or with natural or industrial materials, and mark clear distinctions between different associations and different regions.

Fibre weaving is regularly practised for domestic use, occasionally for commercial purposes, and mostly by women grouped by tribal village, municipality or association. The art of weaving is passed on in the school environment and through artist residencies and introductory workshops organised by the Musée de Nouvelle-Calédonie (Museum of New Caledonia), centre culturel Tjibaou (Tjibaou Cultural Centre) and community centres in Noumea, as well as the municipal and provincial cultural centres in the Interior and on the Loyalty Islands.  Objects made long ago are exhibited at the Musée de Nouvelle-Calédonie, whilst contemporary pieces are displayed and marketed at cultural events and country fairs, such as the Fête de la vannerie et de la robe mission (Basketwork and mission dress festival) held in a different municipality every year, the Fête du cocotier et du pandanus (Coconut and pandanus festival) in Poindimié and at local markets and stalls run by tribe members, as well as through a permanent sales display at the Atelier des Femmes de Nouvelle-Calédonie (Women workshop of New Caledonia), in Nouméa.