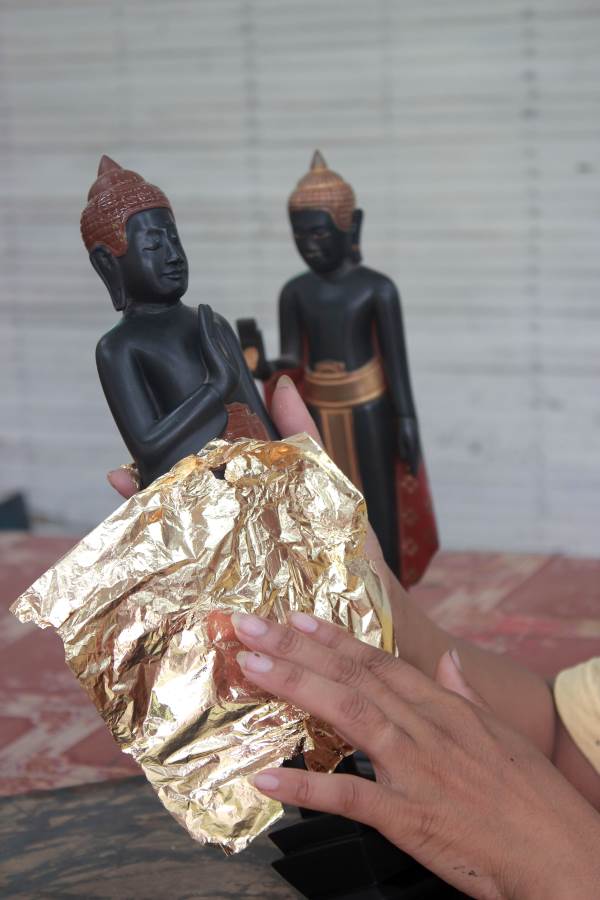 Gilded Buddha images are recurrent in the Khmer culture, particularly the ones representing a standing Buddha with two palms facing the worshipper. This gesture called “no fear” is sometimes simplified with only one hand up with the other one resting along the body. This kind of calming down gesture has been the favorite posture of the Cambodian sculptors since the fourteenth century. Though the discovery of several specimens at the Angkor temples suggests some sculptures were adorned with gilding at that time, this technique was mainly used during the post-Angkorian period.

Producing by hand a gilded statue is a time-consuming process that requires several lengthy steps. First, the Buddha statue has to be carved from a block of wood—generally common rubber tree lumber. The sculpture then has to be covered with base coat, a natural surface filler that is used to smooth off the harshness of the wood. Seven layers of base coat are usually applied in order to obtain the most velvety look and touch possible. Each time a layer of coat is applied, the carved motifs or embossed details of the wooden statue have to be redone. The more intricate the details on the statue are, the longer it is for the artisan to work on it, particularly because of the necessary drying time between each layer. 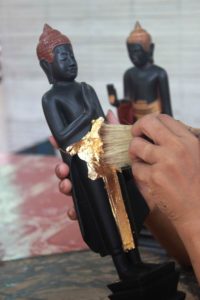 The next step consists in applying colours, which are often brown and red to resemble the antique Khmer statuary, and in adorning the piece with copper or gold leaf. Though copper leaf is easier to handle than gold leaf, most Buddha images are gilded with real gold to make them more precious. Craftsmen will perform the gilding operation with the palm of their hands, using a specific glue; they need to do so with a perfect timing so that the leaves stick to the statue without damaging it.

Finally, the Buddha image is varnished, covered with patina and polished, in order to ensure its durability. Like lacquer work, the art of gilding and polychrome wood sculptures almost disappeared from Cambodia under the Khmer Rouge regime. It was only revitalized in the 1990’s thanks to international support in this field. Today, Artisans Angkor and Angkor Artwork, both located in the Siem Reap province, are the main organizations keeping gilding and polychrome on wood traditions alive in Cambodia.