The gold embroidery represented  the highest form of urban crafts and had a deep historical roots on the territory of Uzbekistan. At the end of nineteenth and early twentieth centuries, the centre of gold embroidery craft was Bukhara. Gold embroidery craft during this period involved mainly men. During high demand periods, close female relatives often assisted to craftsmen. A fair amount of household items during that period were embroidered by silver and gold threads. Among them are the chimildik (the curtain that separated the room into two parts), the joynamaz (praying rug), the tahmonpush (blanket for bedding); small items such as small bags sacks for money, tea, seals, sheath for knife and segments of the horse harness (dauri, horse blanket).

Many details of female festive costumes, men’s robes for the nobles and even costumes for the Emir of Bukhara, were decorated by the gold embroidery. It was also used in many details of children’s clothing, gowns, jackets, boots and other footwear. The following fabrics were used in gold embroidery: imported and local velvet, silk, atlas, muslin, cloth, wool, local semi-silk fabric “alocha” and leather. The basic materials for the gold embroidery were different varieties of metallic threads, many of which are no longer used. Bukhara craftspersons were known for several types of gold embroidery: 1) solid stitching of the background with gold, 2) stitching on top of the clipped paper-drawing, 3) combined technique using the indicated first two types, 4) combined stitching, and 5) combination of gold embroidery with sewn sequins.

In the period of 1920s – 1980s, the gold embroidery was mainly used in production of souvenirs. In the 1990s, gold embroidery in Uzbekistan became a common type of artistic craft. Apprenticeship system now being established throughout the country helps to revive the best traditions of Bukhara gold embroidery art period of its heyday. 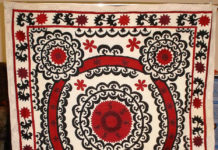