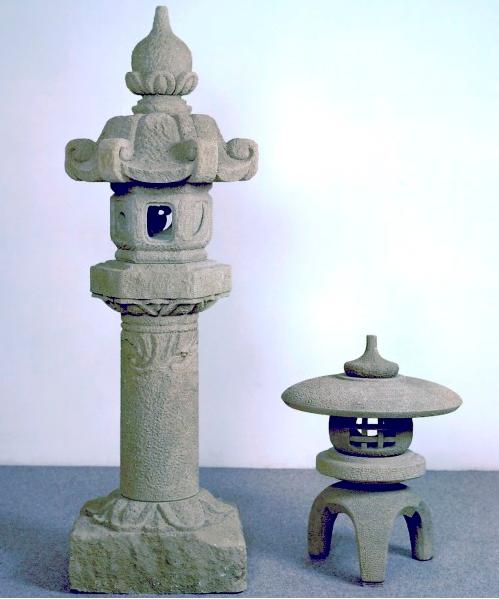 Izumo Ishidoro stone lanterns have been made for many hundreds of years from a local sandstone that was formed from volcanic ash. During the Edo period (1600-1868) Matsudaira Naomasa, the local lord, recognized the value of this craft and placed the stone under a monopoly. The stone was then also used for architectural purposes. Ever since the end of the nineteenth century, the pieces of stonework for gardens and home have been seen as stone art and are well-known throughout Japan.

Being a finely textured stone, some really good pieces of work with gentle soft curves are being produced. As well as having a good colouring, the lanterns and other objects made for use outside soon melt into their surrounds as an aged look overtakes them with the growth of moss on the pitted surfaces. The stone also stands up to extremes of temperature well and will stand the test of time. The existence of a piece dating from the early part of the seventeenth century bears witness to this.

Shapes are created in each location by tools like hatchets and pickaxes in order to create a balance with curves, slopes and ridge lines. Decorations and engravings are done with a chisel to create a relief effect. Finally, as surface finishing, the surface of the stone is made smooth, granular, sharkskin-like or rough stone-like by using special tools.