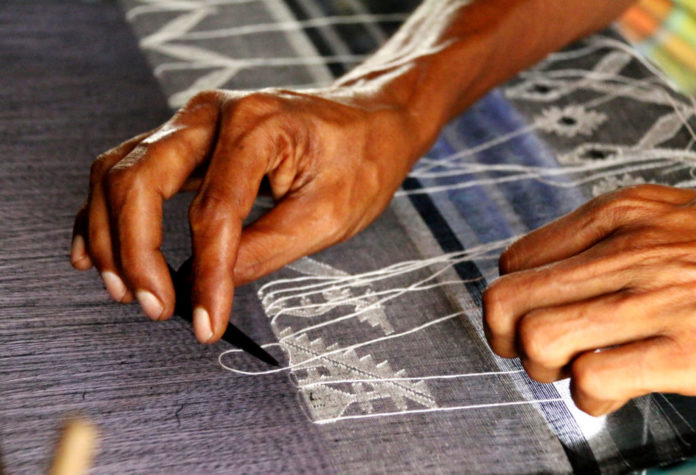 Jamdani, the loom figured muslin, was the chef d’oeuvre of the Dhaka loom. The name was derived from the Persian word jam-dar meaning flowered or embossed.  From the Mahabharat to the records of Pliny, Megasthenes and Abul Fazl’s Ain i Akbari, history is replete with references to the outstanding quality of the muslin of the sub-continent and its dominance over world trade.  The unrivalled quality of Dhaka’s muslin was attributable to three important factors—photee, a superior  cotton (gossypium herbaceum), which grew along the banks of the Meghna; the exceptional fineness of handspun yarn and finally, the skill of the weavers. It was this indigenous cotton which created the finest muslin, and later Jamdani, thereby remaining unique to Dhaka and its environs. Presently, jamdanis are woven in Sonargaon, Dakhin Ruposhi, Noapara, Tarabo and Siddhirgunj. 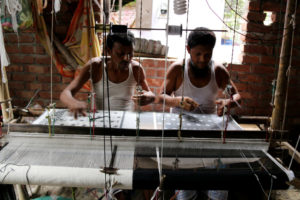 Jamdani weaving uses discontinuous supplementary weft technique, as in brocade. The jamdani loom along with pre-weaving processes and weaving techniques have remained the same as in earlier times. Cotton yarn is starched, wound and dried on cylindrical bamboo frames. Warp, weft and design yarns are rolled on various sizes of bobbins. Warp yarn is inserted individually into comb-like dents of the bamboo reed and set on to the loom. Silk warps, highlighted with gold or silver threads, are used sometimes to create a  gauze like texture.  Most of the preparatory work is done by women; they have recently taken up weaving as well. Today memorised instructions known as buli have replaced by paper patterns; traditionally weaving masters instruct their apprentices orally to weave the patterns together

The remarkable range and diversity of designs set jamdanis apart from all other muslins. According to George Watt, Percy Brown and other historians, Jamdani patterns were of Persian origin. Under Mughal patronage, Persian weavers worked with indigenous counterparts and created the finest woven patterns in jamdanis. It is this exquisite design element which makes jamdani unique to Bangladesh. It is in a thriving condition.

Askari, Nasreen and Rosemary Crill. Colours of the Indus. London 1997.

Baines, Edward. A History of the Cotton Manufacture in Great Britain. Fisher, Fisher and Jackson, 1935.

Birdwood, G. Report on the Old Records of the India Office. London 1891.

Watson, John Forbes. The Textile Manufactures and Costumes of the People of India. London 1866.