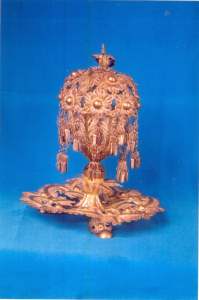 In South Asia, jewellery dates back to 4000-3000 BC. The art of filigree flourished and was finest during the Mughal period (1608-1763).  After the emergence of Bangladesh in 1971 it again slowly revived under the commercial influence of Cuttack, Orissa, India.

Dhaka was famous for its jewellery and filigree work. Beads made of semi-precious stones have been found at Wari-Bateswar, northeast of Dhaka. Stone beads have also been excavated at Mahastangarh. Traditional silver ornaments such as makri earring or heavy tribal jewellery are made in the Chittagong Hill Tracts. In Cox’s Bazar, ivory or bone ornaments are popular. 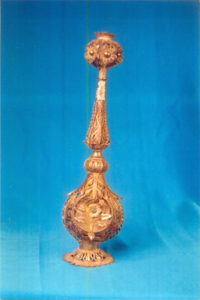 The Mughals were fond of using stones in jewellery. During the British rule English designs influenced Indian jewellery.  In mid 1960s, pink pearls began to be used. Jewellers have adapted their filigree technique so that less amount of gold is needed. Some fine jewellery belonging to the nawabs of Dhaka shows the influence of the Mughals as well as of European designs.

Mohsin, K.M. “Commercial and industrial aspects of Dhaka in the Eighteenth Century”. in: Dhaka Past and Future (ed: Sharif Uddin Ahmed). Asiatic Society of Bangladesh, Dhaka.