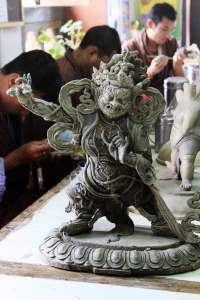 Jim zo or clay sculpture is one of the oldest crafts in Bhutan that has been practiced and passed down over the centuries. The most precious and blessed clay statues made by Trulku Dzing during the reign of Zhabdrung Ngawang Namgyel (1594-1651- The Founding Father of Bhutan) in seventeenth century are still found in many monasteries and Dzongs (Fortresses).

Clay statues of Buddhist deities, gods, goddess and other prominent religious figures exemplify clay sculpture in the country.  Clay is found across the country in different pigments. The success in the clay work lies in a balanced combination with other materials like traditional desho paper or beaten bark of the Daphne plant. It also requires skills in shaping and designing the wet clay.

The mixing and beating of the clay is done manually by the artist. After the mixing, the artist then shapes the statue to required shape and size. They also used copper wire inside the statues to keep the clay intact.

The institutes of Zorig Chusum in Thimphu (capital city) and Trashi Yangtse (Eastern Bhutan) provide a six years diploma course in Jim Zo for interested high school graduates. With an average of 20 students passing out from these institutes after mastering this art, it helps to conserve the art of clay sculpture in the country.

Two women of Gangzur in Lhuentse could be the last ones to keep the trade alive in their area.  Pottery-making is a laborious process and not many youth are keen on taking up this craft.  62-year-old Tshewang Choden, one of two women is unsure if anyone would continue the pottery making and keep this trade alive.

In Trongsa (central Bhutan), the art of pottery is encouraged and supported by Tarayana Foundation, a civil society organization.

The Moenpa community from Jangbi village under Langthi gewog still practices traditional pottery-making. They make pots in traditional manner, the potters first collect soil, sieve it, and then the soil is soaked for months in water until it turns into a fine mud pulp.  The pulp is then used to make the pot. The pots are dried using the traditional oven.

They make earthen utensils, which are sent to Thimphu during exhibitions and also sold in their district.