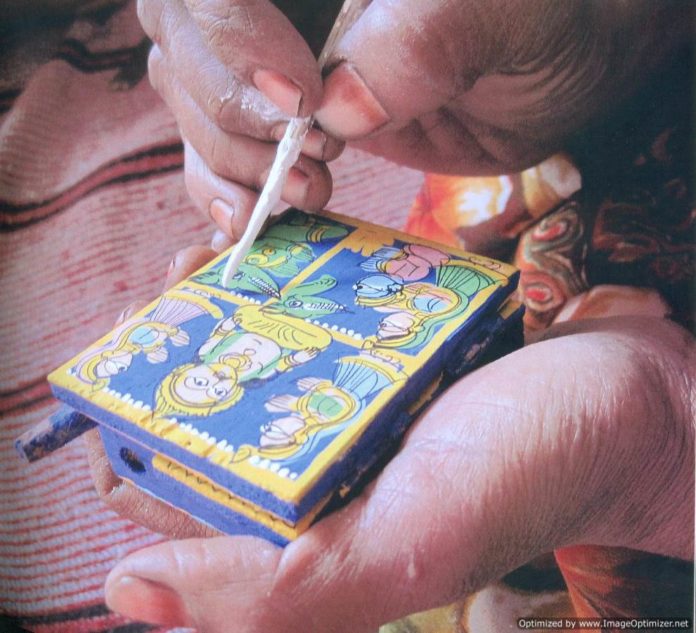 The evidence of the antiquity of painted narrative traditions extends from architectural remains and mural paintings to textual evidence dating back to the third century BCE. Serving the needs of a broad swath of people by bringing access to religious stories and didactic teachings, these continuing traditions include the kaavad, the miniature portable shrines crafted in Bassi, Rajasthan. 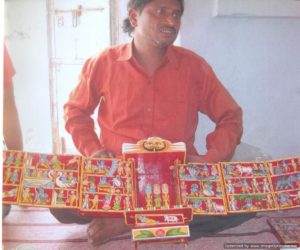 Conjuring up a temple the narratives hand-painted on its folding, concertina doors depict episodes from the Hindu epics, stories of local hero-gods and saints, family genealogies and the heroic deeds of clan ancestors. The wooden shrine contains ingeniously hinged multiple doors, which are ceremoniously opened during the recitation by the itinerant storyteller-priest, the kaavadiya-bhat.

The viewing of the kaavad simulates a visit to a shrine. The kaavadiya-bhat’s recitation leads through the spaces characteristic of a temple, moving further inwards to the innermost chamber of the sanctum sanctorum to eventually reveal the deity. Attending the recitation is considered to be part of the devotees’ sacred ritual duty, and to make gifts in cash or kind to the kaavadiya-bhat part of their obligation. This portable temple-shrine continues to come to the doorstep of devotees across Rajasthan.

The wooden cabinet of the kaavad is constructed and painted by five families of the Suthar community of carpenters based in the village of Bassi in Chittor, Rajasthan. Following time honored traditions each kaavad is specially customised to the requirements of the kaavadiya-bhat.

While these customs remain sacrosanct, the makers of the kaavad have additionally expanded the scope of their craft. The portable kaavad is now put to contemporary use that extends from its application as a teaching tool with alphabets and numbers on the panels to an effective device communicating public health messages in rural areas, and additionally as a decorative object for urban homes.