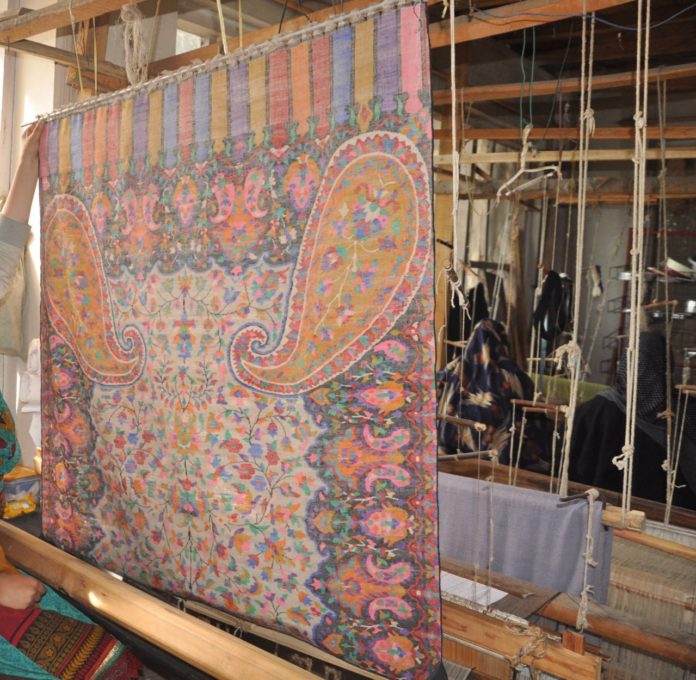 Myths abound about the genesis of the patterned kani pashmina weave in Kashmir. One legend ascribes the origin of the craft to the weavers from Persia and Turkey who flocked to the court of the great aesthete Sultan Ghiyas-ud-din Zain-ul-Abidin in the fifteenth century. New ideas and techniques, combined with Kashmir’s already formidable wool spinning and weaving industry, evolved to form the essentially indigenous kani weaving technique. A coveted luxury object in demand by kings and emperors across Asia, by the eighteenth century its fame had spread to the elite networks of Europe. 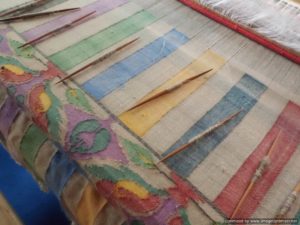 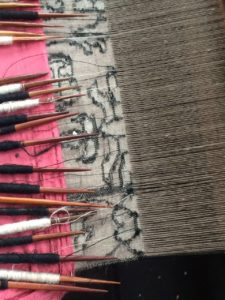 Traditionally made with the fine pashmina fleece of the changthangi (capra hircus) goat, the kani weave was variously used as a shawl, patka-waistband, turban or khilafat coat-cloth. The complex loom technology of the double interlock twill tapestry weave is employed to create the characteristic patterning. The loom has four treadles and, instead of the usual shuttle, it is woven with kanis—the small eyeless bobbins that give their name to the shawl. In an intricately patterned shawl, up to 1500 kanis can be used in the weaving. With the weft yarn turned back to form areas of colour that are interlinked at the edges, weavers add on additional wefts when required. In spite of two weavers working together on a loom, only half an inch is woven in a day. Thus a single piece often taking a year to complete. The weaving follows the naska paper-pattern created by the Nakqqash pattern-maker. Each pattern is converted into a series of shorthand steps (taleem) that is interpreted and recited to the weaver to follow. The kani shawl, with its wide colour palette densely patterned with paisleys, creepers, floral and bird designs, continues to be woven in the traditional manner in the village of Kanihama and other parts of Kashmir.