Kasabu boavalhu is the elaborate neckline of the Maldivian traditional dress dhivehi libaas. The embroidery technique used for making this neckline is called kasabu viyun.

Kasabu boavalhu is made from imported cotton, silk and metallic threads. Vivid colours such as greens, reds and blues are used along with silver and gold. 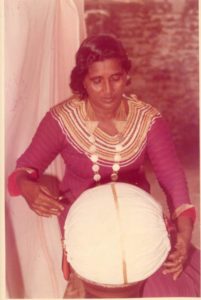 A special set of equipment is used to make the kasabu boavalhu. Gathaa fai is the base structure. It is made from wood in the shape of a short vase. On top of the hollow base is the gathaafaige boa, a round cushion made from cloth which is used to pin threads. The five inch long foalibai function as the weights that hold the threads. Since heavy ones are preferred, they are often made from sturdy wood or fishbone. Up to 34 of these can be used at one time.

Using this set of equipment, ribbons are woven. There are three types of ribbon—hiru, bagiyaa and rodhigandu. Rodhigandu is the most elaborate of the three. Once the ribbons are prepared, they are hand stitched onto the neckline. The neckline has to be at least four inches wide and the ribbons have to be placed in a specific order.

Within the country, there are regional variations to how the kasabu boavalhgu is made. For example, the women of Huvadhoo Atoll use more colourful threads while the women of Addu Atoll use the classic silver and gold threads.

The skill is passed on from generation to generation. In the north, Kulhudhuffushi and Utheemu are said to be keeping the craft alive while in the south, Gaafu Dhaalu Thinadhoo, Addu Atoll, and Gaafu Alifu Villingili are said to produce these necklines still.

Although now the dhivehi libaas is mostly worn for ceremonial events, visitors can still see elderly women wearing the dhivehi libass on some local islands. Recently, young fashion designers are incorporating kasabu viyun technique to produce their own modern spins of the dress, helping to keep the craft alive.