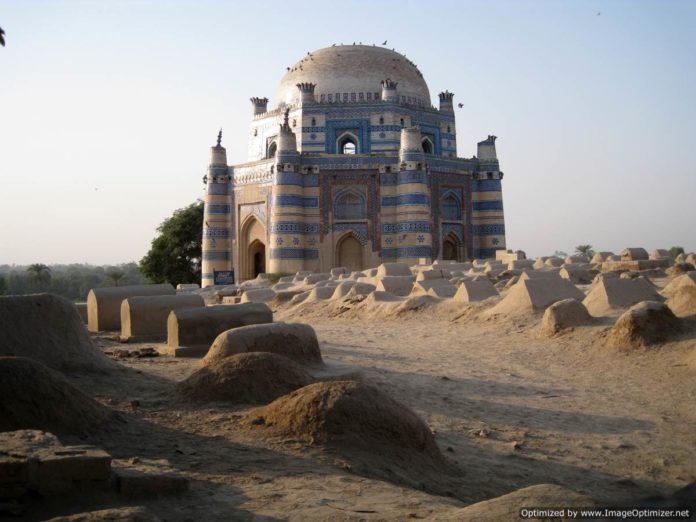 Kashi refers to a specific style of decorative patterns on glazed vessels and tiles produced in the Muslim world. First influenced by Egyptian and later Chinese ceramics, the craft was developed in Kashan, Iran. The origin of the term can be traced back to the city of Kashan or Arabic word kasi meaning “glass”. Written documents show that Yakut al Mustasimi first used the term Kashi or Kashani in the thirteenth century. Ibn e Batuta also referred to Kashi decoration on mosques in Mesopotamia, Isfahan, Tabriz and Mashhad. From Iran, craftspeople travelled to other parts of the world including areas that are now part of Pakistan, settling in Sindh and Punjab to continue their craft practices. In Sindh, Kashi gained prominence in the fifteenth century; facades of buildings were embellished with terracotta and glazed tiles to give a luminous appearance.

In Sindh and Multan, the craft of making arabesque and floral patterns on clay vessels, architectural pieces and tiles is called kashikari. Kashigar, a craftsman who demonstrates command over the craft, is also the family name of some traditional potters for whom kashikari is an ancestral craft. The craft, which developed over the centuries, is distinguishable in its processes, materials and patterns from other traditions of painted ceramics.

In Pakistan the main centres of kashikari are Hala, Nasserpur and Multan. Local terracotta clay is used to shape the ware, which after drying, is covered with a white engobe or slip, astar. Decorative patterns are then traced on the surface by dabbing graphite on perforated paper. The resulting marks are outlined using a brush and dark blue metallic pigment. Light and dark blue and sometimes phiroze to turquoise colours from cobalt and copper oxides are filled inside the outlined areas leaving a white background. Other colours used in kashikari include green, yellow and brown. After painting, the surface of the ware is covered with a transparent glossy glaze and fired to about 900 C in a traditional wood fired kiln. The tiles range from simple squares and rectangles to complex shapes, depending on their final installation method; simple tile laying, cut mosaic, inlaid in concrete or plaster, relief mosaic and muqarnas.

Kashikari work can be seen all over Sindh and Punjab in the form of architectural pieces and tile work on mosques, mausoleums and shrines. The floral and geometric patterns used in kashikari have been preserved over the centuries mainly because it is an ancestral craft and the patterns are documented in the form of tracing paper. Some kashigars have deviated and use new colours, designs and imagery to breath fresh life into their centuries old craft, primarily as a result of design interventions initiated by government and private organizations. Over the years the number of kashigars has steadily declined and the quality of their craft has also suffered, due to the lack of patronage for the continuation and preservation of the craft. There are about 8-10 operating karkhanas of kashigars in Sindh and Multan; notable names among them are Ustad Wajid Ali and Ustad Muhammed Alam from Multan, Ghulam Muhammad Soomro and Jani Soomro from Hala and sons of Mushtaq Kashigar and Muhammad Siddique Ghirano Kashigar from Nasserpur.