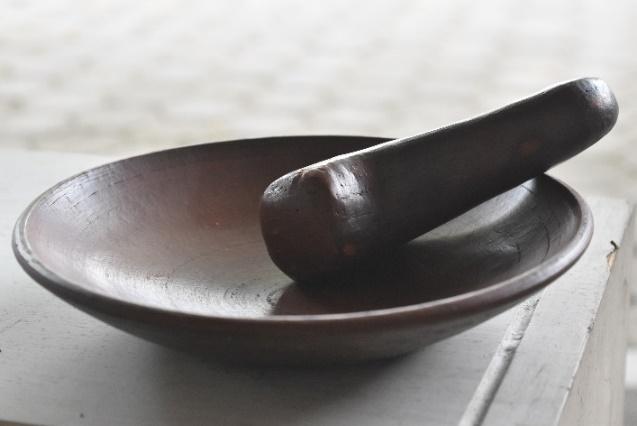 In the past, they mostly produce earthenware vessels using a basic hand-building technique such as throwing, pinching, and coiling and then fired using a traditional open-field firing. But they also have their own technique that called tempel and usually used to decorate sculptural object. Some local potters still use this technique while some others already use a more modern technique and equipment. Nowadays, they already use plaster cast to hasten their production and build their own brick kiln.

Kasongan originally produced a functional product called wadah such as tableware, cooking ware, water vessel, and also roof accessories called wuwung. But recently, most big-scale workshops have begun to explore artistic objects such as sculpture and decorated large vessel to reach a more global market. This movement was initiated by Sapto Hudoyo, a Yogyakarta renowned artist, in the early 1970s. He taught local Kasongan potters how to improvise tempel technique and how to make a sculptural form. Since then, Kasongan is getting more and more popular because of their sculptural works, but at the same time, most of the potter starting to leave behind their traditional vessel form.

Below are the traditional products in each category:

Cowek has a similar shape to a plate. Most people used it as a plate, but sometimes it also used along with munthu to grind peanuts and spices for condiment or sauce.

Kendhi is a traditional water jug. It can be found not only in Javanese culture but almost every Asian country has its own kendhi. 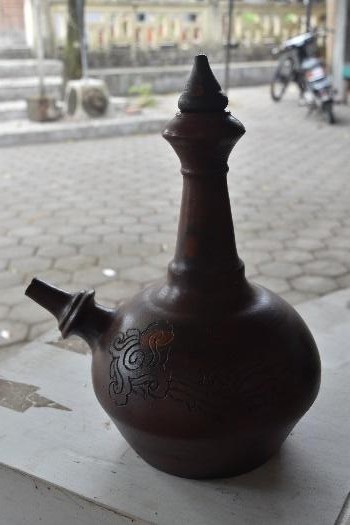 Keren is a small earthenware stove used for daily cooking. It consists of three sizes, with each size have a specific name. The biggest one is called keren gedhe (“big stove”). The size is approximately 35cm in diameter and 35 cm in height. The hollow space inside keren is used as a place to fire the wood. The big size is related to its function to boil a large amount of water or cook rice. The second one is keren tanggung which a pretty similar to keren gedhe but a little bit smaller in diameter, only 30 cm. It usually used with wajan, a traditional frying pan. The last one is the smallest one called keren ceretan, usually utilized for boiling a small amount of water using ceret (an aluminium or iron kettle)

Anglo is also a small earthenware stove but the form is different from keren and have a more complex part compare to it. In the middle part, it has a place to put a burned coal and the hollow space below functioned as a place to hold the coal ash. Most people use it as a cooking stove but it is also used in batik production to melt malam (wax used to make motif in batik). It also varies in size: anglo gedhe, anglo tanggung, anglo mangsakan, anglo ceretan and anglo empluk

Kuwali cooking ware is one of the basic tools in the traditional kitchen to boil water and cook vegetables. The unique part of making kuwali is how they treat it after the firing to get rid of the earthy smell so I will not contaminate the food. There are also many types of kuwali: Kuwali gedhe, Kuwali tanggung and Kuwali cilik

Padasan is a large water vessel specifically used for wudhu/ablution, a ritual for muslim before shalat/pray. It is usually placed beside a well and has a lid to cover so no dirt can contaminate the water inside. Common padasan usually have a diameter and height around 50cm. There is also a smaller one and used for washing hands.

Jambangan is bigger than padasan and used for storing water in the bathroom. It also used in some Javanese traditional ceremony.

Genthong considered as the largest compared to the other water vessel. This size is related to its function to store most of the water supply that is needed inside the house such as for cooking and cleaning. There is also another unique function of genthong. It can be used to hasten the process of making the fruit ripe. The method is to put kuwali in the mouth of genthong and burn dry leaves inside it and to rise the temperature inside genthong. This process last around 48 hours.

Most Indonesian houses in rural area still using an earthenware roof. This roof is still mass-produced in some area across Indonesia. Even though Kasongan doesn’t produce this, they have some unique product that used as additional accessories called wuwung. This product made by hand and decorated manually using tempel technique to put some detail such as feather and plant image.