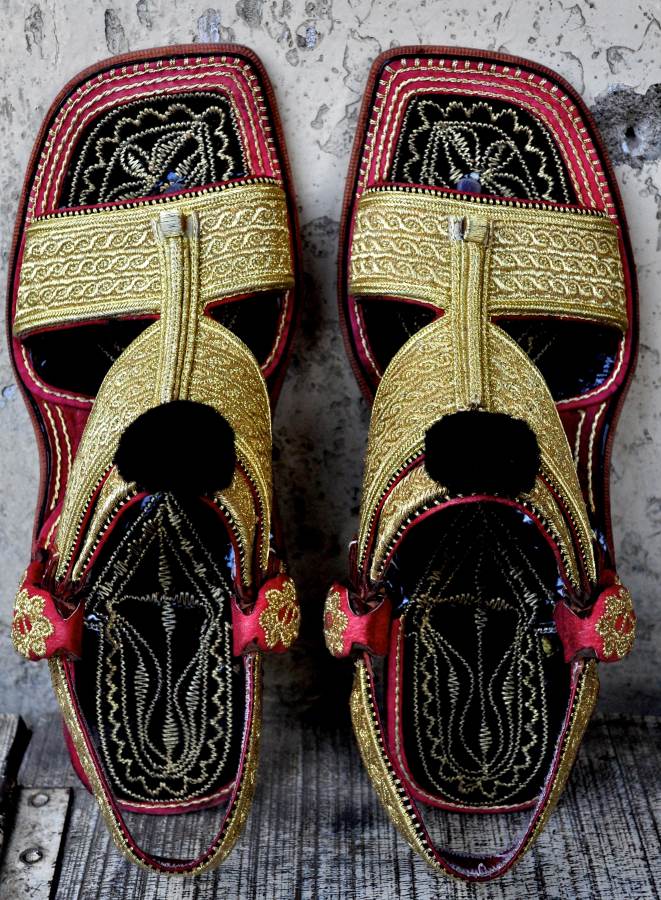 Once leather has been bought in a natural dark or light brown colour from Sargodha, the process of colouring and tanning begins. J Wilson, an Englishman, in Gazetteer of the Shahpur District, 1887, has described the process at length. The artisan mixes red and/or green pigments in water, and soaks the leather in coloured water for several hours. Then, he leaves the coloured leather in the sun to dry. 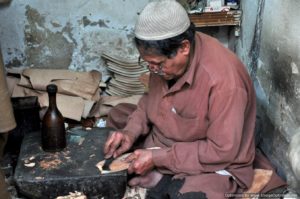 The sole of a handcrafted slipper (juti) is almost always made of buffalo hide. It must be thick, hard, and durable. The upper, however, may either be of cowhide or goatskin. It should be thin, soft and comfortable. The design is first drawn on a paper by the okair saz (tracer), and then placed on top of a ream of kite paper. The design is cut through the entire ream with a sharp cutter, turning it into a stencil. Each stencil is now distributed among the embroiderers, one stencil being good for a single juti.

The tilla kar (embroiderer), invariably a woman, pastes the stencil on the upper of the shoe, and embroiders in gold or silver wire. (In olden days, a separate class of artisans for drawing real gold and silver wire was known for tarkashi and seem bafi. Jutti embroidered in sucha tilla or the real gold thread was never thrown away upon wearing out. It would be sold to a niariya or the one who would extract metal from scoria by burning the article in the seller’s presence. He would then collect melted silver or gold from the ashes, weigh it and pay its price to the seller). Today, synthetic thread has replaced the real wire.

Once the pair of uppers is ready, it is handed over to the mochi or cobbler who stitches together the upper and the lower part (talwa) with the help of a hooked needle or awl. Design vocabulary varies from region to region, resulting in tarangri, gaach, palshi and kaniyan wali multani juti.

Almost forty five kilometres northeast of Sargodha in southern Punjab is a small town called Jhawarian. Here, Ghulam Nabi is the best-known shoemaker. He is seventy five years of age and continues to live in Muhallah Ludhiana. Shoe-making is his ancestral profession that he learnt from Ghulam Muhammad. But now, none of his children wants to adopt the economically insubstantial profession. In any case, machine-crafted footwear has almost entirely replaced the handicraft, giving way to cheaper versions and less time consuming short cuts.