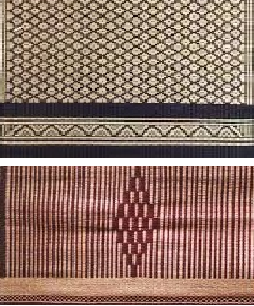 The interlacing of grasses, reeds, splits and leaves to weave mats finds mention in ancient Sanskrit texts of the Atharva Veda (1200 – 1000 BCE) and in the epics, folklore and hymns. In Tamil Nadu, highly valued super-fine silk-like mats or pattu pai are woven in the small village of Pattamadai from the wild korai grass (cyperus corymbosus rottb.) that grows abundantly along river banks and in marshy wetlands.

Korai grass is woven into a rough quality of mat in several centers. But in Pattamadai, mat weavers from the Muslim Lebbai community have the skill and knowledge to split the grass to the fine 120 count that is necessary to create the superfine malleable foldable variety. The 61 mat weaving households trace their knowledge of processing to their ancestor Hassan Bawa Lebbai, who lived more than a century age. It was he who found that soaking korai grass in the river softened the fibre to allow for an increase in number of strips or counts from the coarse 40 to the fine 120 splits from each stem. Each mat takes about a month in its making. While the men prepare the wefts, it is the women who weave on the floor loom. The splits form the weft while cotton or silk yarn, that has now replaced the traditional elephant aloe fibre, forms the warp. Dyed in colors of red, black and green the motifs include stripes to monuments, flora, fauna, human figures and calligraphy.

Pattamadia mats found a place on the international map in 1953 after being sent as a gift on the coronation of Queen Elizabeth II. Since then it has been a part of the diplomatic gift package to visiting heads of state.