Kord (knife) is one of the items of tangible culture of the Tajik people and an integral part of the traditional male costume. Traditionally, along with festive folk clothes, a man wears not only his own knife, but also a knife inherited from his father.

The kord is a knife with a straight, relatively narrow blade. Blades are divided into three groups depending on the length: short (less than 14 cm), common (from 14 to 17 cm) and long (from 18 to 25 cm).

The kord’s handle is usually made of wood, bone, horn, less often from metal and ends with a protrusion that protects the hand from slipping onto the blade. Both the blade and the hilt can be engraved, the handguard can have the brand of the master who made the kord.

Tajik knives have a hardened blade that does not require sharpening for a long time and can cut even the hardest items. The secrets of forging the blade and decorating the handles are handed down by the craftsmen from generation to generation.

There is a division of male and female knives. Men’s knives are used for hunting, for domestic purposes and as cold weapon used in combat. Women’s knives are designed to be used in the household. Knives made entirely from the horn are used in weaving, as well as for smoothing the seams when sewing clothes.

Among the Tajik tribes one could also find dagger type knives, of approximately 500 mm long, with a curved blade and an elaborate handle. They served as a sign of high status of their owner. Blades of such dagger-knives were made of high-quality hardened steel and Damascus steel. Handles were made from various types of wood, animal horns or jade, inlaid with corals, mother of pearl, precious and semiprecious stones.

Knives are attributed with magical properties. There is a belief among Tajiks that knives protect from the wiles of evil spirits, so quite often a knife is placed in the cradle next to the baby. It is believed that a knife given to someone as a present can lead to a quarrel, so knives are never presented. The knife must be bought, at least for a symbolic price.

The most famous kords are produced in the city of Istaravshan, located in the Sughd region in the north of Tajikistan. Also, the production of knives is developed in Khujand, Isfara, Gissar and Hystevarz. Most renowned kord makers among others are Abdumanon and Mahruf Huseynzade, Sulton Normahmadov and Ibrahim Mirzoev. 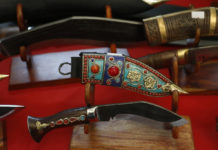