Ban Thawai is a wood craft village that has become a popular cultural tourist destination in Chiang Mai province. The village is located in Hang Dong district to the south of downtown Chiang Mai and is known as the hub of exquisite woodcarving among Thais and foreigners for its over 50- year history.

Three important men who gave birth to Ban Thawai woodcarving were Nandaeng Phanthusa, Chaima Inkaeo and Huean Phanthusat, who had learned the craft at Nomsilp Shop in Ban Wua Lai near the Chiang Mai Gate and transferred the knowledge to Thawai villagers, turning Thawai into a craft village.

In addition to the famous Thawai woodcarving, the other distinct wood-related crafts developed here include the technique for making beautiful natural wood colour by dissolving marl in water and apply on wood surface.

After it is dried out and polished by sandpaper, apply polished oil on the surface. The other technique is called “ si taek lai nga”. This technique is used for making cracked surface design to create a sense of antiquity by hand-brushing paint, which gives a rough pattern, or by air-brushing which gives a delicate pattern and antique replication by mud-coloured polished oil finishing. Moreover, gilded lacquerwork (khrueang khern), textiles and basketry are also produced here. 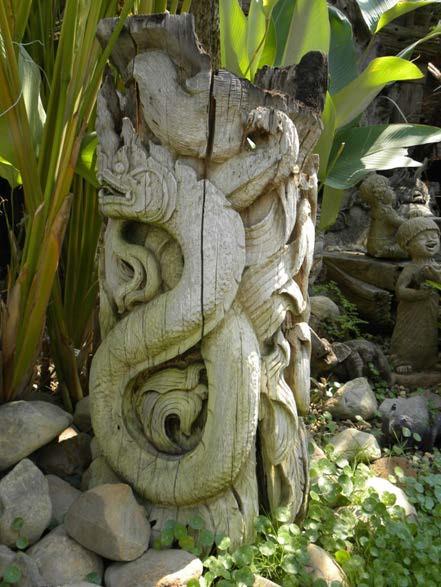