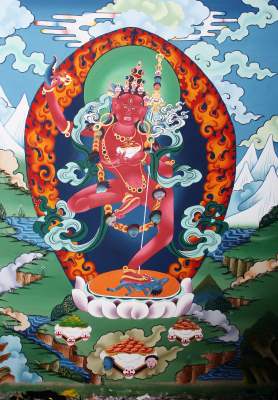 The art of LhaZo (painting) is as old as the existence of people in the country. The art has been passed down from generation to generation from the master painter (lharip) to novice students. It was mainly practiced by the monks in olden days. This art is considered as religious and the profession is an act of reverence and devotion. 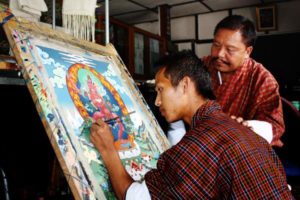 The raw materials used in Bhutanese paintings are natural pigmented soils that are found in most places in the country. Sa-Tshoen (soil pigments) are of different colours namely black (sa –na), red (sa-tsag) and yellow (sa-ser). These days, different shades of acrylic paints are available in the market. The different varieties of designs and colours are seen everywhere in the country. Every Bhutanese temple, monastery and house is painted and decorated with designs and auspicious Buddhist signs. Bhutanese paintings represent religious aspects, people’s beliefs, ideas, thoughts and aspirations. The colours epitomise the Bhutanese art. Thankas (religious scroll paintings), paintings of Buddhist deities on the walls of temples and paintings on religious pieces are an integral part of this art.

The art of Lha Zo became popular among the youth, after the establishment of Thimphu Institute of Zorig Chusum in 1971. On an average ten students graduated every year after completing six years diploma course in LhaZo. Similarly the Institute of Zorig Chusum in Trashi Yangtse (Eastern Bhutan) established in 1997 also offers course on LhaZo. With such training institutes, there is no dearth of lharips (master painters) in the country. The graduates from these institutes play a vital role in preserving and keeping the art of painting alive in the communities. Their works are prominent in every architectural piece namely temples, houses and the handicrafts shops in the country.

Yeshi Namgay is one of the lharips in the country. He is currently working as the vice-principal at the Thimphu Institute of Zorig Chusum. He started learning the art of LhaZo from the early age of nine. After mastering the art, he started to teach the craft from the age of 21. For the last 33 years, he has been imparting his knowledge on this craft to the interested younger generations in the institute.