Magimagi can be very coarse like rope or extremely fine like string. It is made only by men. Before the advent of synthetic string, magimagi was the most common material used for fastening, lashing and wrapping.  Magimagi was particularly useful in the building and maintenance of sea-going canoes which had lashings—the ropes used to fasten the canoe—that had to be regularly maintained.  Magimagi was also used to form the webbing in fishing nets, being woven in varying strengths depending on what the net was made to catch. 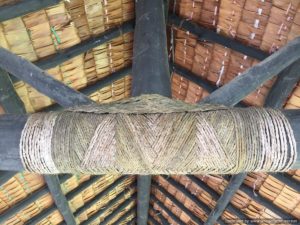 Like tivaevae in the Cook Islands, magimagi has a spiritual and cultural significance as well as a practical use. In some parts of Fiji, huge rolls of magimagi, called kava, used to play a very important role in the ceremonies which ended the period of mourning for a high chief.

In memory of their dead leader, local men braided giant rolls of magimagi that  stood as high as to metres. This was meant to represent the body of the departed chief.  The roll or “body” was always crowned by a second tubular roll which functioned as a head, before it was presented at the ritual.  Sometimes the kava, or magimagi “chief”, was “clothed” with barkcloth.

Magimagi is one of cultural products that continue to be manufactured and traded and sold in both contemporary commercial spaces as well as for cultural uses, where certain clans manufacture the rope for uses specifically in cultural ceremonies. However, magimagi in more modern times can be found in clothing, in visual art products and as decorative embellishments in décor in rooms and other décor products. Its uses in modern contexts are very diverse and creative, which means that this is a Pacific cultural product that will not be lost and be used in the future and in various ways.