The excavation of the bronze statuette of the Dancing Girl at the Indus Valley site (2300 – 1750 BCE) is evidence of an ancient knowledge of the techniques and skills of processing metals. Across specialised clusters, hereditary craftspersons continue to cast metal. They cast either hollow or solid, by the age-old lost-wax or circe perdue method. They craft icons and objects for rituals and religious purposes and for the decorative and the everyday. 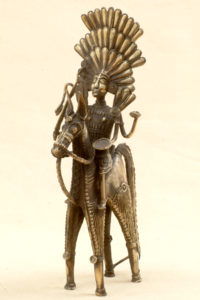 Each object is cast from a unique mould. No two are similar. The process requires the building in wax of a solid or hollow image (with an inner mould of clay) of the object to be cast. When heated the wax melts. It is then poured out and the empty space created filled with molten metal. While the techniques followed across centres have similarities, the iconography, and imagery varies widely from one place to the other.

In the south of India, the solid casting variant is practised by the traditional Sthapati, and Kammalan architect-sculptor community, whose practices conform to ancient art scriptures and ritual texts like the Shilp Shastra. From centers in Tamilnadu, Karnataka, Kerala and Andhra Pradesh, the tradition remains vibrant. Examples of unusual practices abound like the Aranamula metal mirror with its reflective surface, whichis cast by members of the Achari family to a secret formula. The charraku metal vessel in diameters of up to eight feet, which is used in Kerala to cook the ritual offering, is cast by the Musari community. In the eastern corner of India, there are many traditions including the colourful and highly ornamented copper Ku Buddhist icons cast in Sikkim. 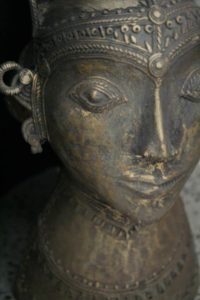 The technique of hollow-casting, generically known as dhokra, is largely practiced in the tribal belt extending from Eastern to Central India. The metalsmiths belong to hereditary nomadic, usually tribal communities, including the Malhore in Jharkhand and Bihar, Karmakar, Gharua and Mal in West Bengal, the Bhareva and Gadhvas of Madhya Pradesh, the Gharuas of Chattisgarh, Ghontara, the Chitraghasi and Ghasi of Odisha, and the Woj in Andhra and Telengana. The images and objects subscribe to belief systems and community traditions.