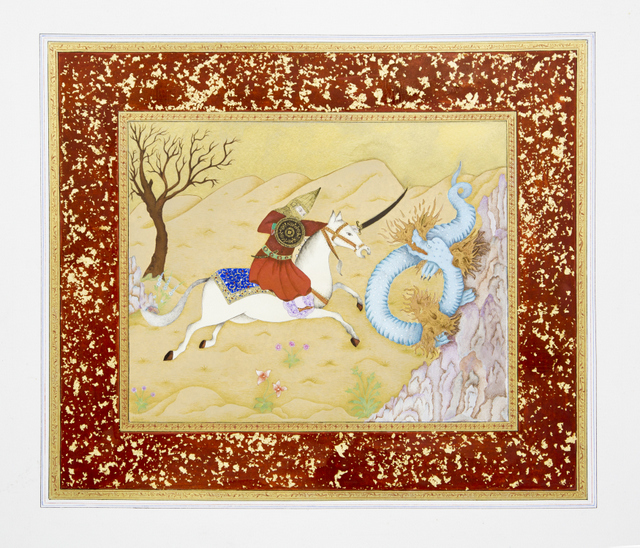 Miniature painting has thrived in Afghanistan for centuries, primarily as a luxurious court-based art practiced for the delights of royal patrons, who could afford to keep an atelier (workshop) of artists. The fourteenth-century ruler Timur, at his court in Herat (western Afghanistan), patronised Behzad, a legendary miniature painter. Many contemporary Afghan artists look to Behzad as a model, while also taking inspiration from the contemporary world.

The key raw materials used for miniature painting include delicate brushes, traditionally sourced from the neck fur of baby squirrels for the very finest bristles, as well as hand-crafted vasli paper and opaque watercolour paints. Pigments are extracted from natural sources, such as minerals and precious stones. Afghan painters use a mortar and pestle to grind lapis lazuli finely. This precious source of rich blue is mined in the Badakshan region of Afghanistan—the only source of the stone in all Eurasia. Artists control the intensity of the pigment by choosing the deep blue of the mineral itself, or the white veining running through it. Once ground, the powder is washed and filtered for impurities before mixed with binders.

Motifs depicted in miniature paintings range from scenes drawn from the traditional epics of Persian literature, such as the Shahnama of Firdausi, to observations of the natural world. Geometric shapes are also present, particularly the finely worked shamsa (sun-like) medallion. Shamsa illuminations are often oval or circular in shape, and are frequently used as the frontispiece illuminations in Islamic manuscripts. They also stand alone, or as framing devices for calligraphic passages of Persian poetry.

Celebrated Afghan artist Khadim Ali, who has exhibited at the Guggenheim and the Venice Biennale, references traditional miniature painting techniques in his own large-scale works.

Turquoise Mountain in Kabul champions and supports Afghan miniature painting at its internationally-celebrated Institute, from which artist Fakhria Nezami, who has exhibited her work in Qatar and the UK, graduated.