Olive oil soap production is based in Nablus. The first recorded date of the craft is the tenth century, when soap was mentioned as being one of Palestine’s exports in the writings of al-Muqaddasi (380/990). In the crusader period, Nablus was so famous for its soap that the king monopolized the industry. Both shaykh al-Rabwa (1300) and mujir al-Din al-Hanbali (1495) referred to it, which indicates that this famous industry continued into the Mamluk period and was associated with Nablus.

In the Ottoman period, it became an important traditional industry. Statistics show that fifteen factories existed in Nablus by (1842), and that this was increased to thirty in the early twentieth century. Soap factories are found in six quarters of Nablus (al-Gharb, al-Yasmina, al-Qaryun, al-Aqaba,al-Qaysariyya and al-Habla). There is a street in the old city called soap lane that connects both al-Yasmina and al-Qaryun Quarters.

Soap manufacture helps to establish an economic relationship between the urban and rural areas of Nablus. The production is divided between the city of Nablus and its surrounding villages. The villages provide the chief ingredient, olive oil, and the city manufactures and distributes the soap.

The manufacturing process consists of four steps: cooking, spreading, cutting, drying, and finally packing. The raw materials of Nablus soap are virgin olive oil, water, and an alkaline sodium compound. The compound is made by mixing the powdered ashes of the barilla plant (qilw), which grows along the banks of the River Jordan with locally supplied lime (sheed). The sodium compound is then heated with water and the olive oil in large copper vats over fermentation pits. The solution of water and the sodium compound becomes increasingly concentrated in a series of 40 cycles repeated over eight days. During that time, an oar-shaped wooden tool known as a dukshab is used to stir the liquid soap continuously. The liquid soap is then spread in wooden frames to set. After setting, it is cut into the classic cube shape of Nabulsi soap and stamped with the company’s trademark seal. The soap cubes then undergo a drying process which can last from three months to a year. The finished product is ivory- colored and has almost no scent.

Most soap workshops have the same architectural design. They are usually two-storey buildings. The first storey is used for cooking the soap. Tt generally has a long hall with a high ceiling and small windows, inside which there are cisterns that store oil, a furnace, a big pot and many basins filled with water.

The second storey is where the soap is spread, dried and prepared in a vast covered structure that has many windows. The factory has large entrances to facilitate the admission of oil deliveries and the exit of soap carriers. At the entrance is a room, which serves as the owner’s office. The families who played a role in developing this product include the Tuqan, kan’an, al- Masri, Abd al-Hadi, Al-khammash, al- Shak’a, al- Rantisi, Ashur. 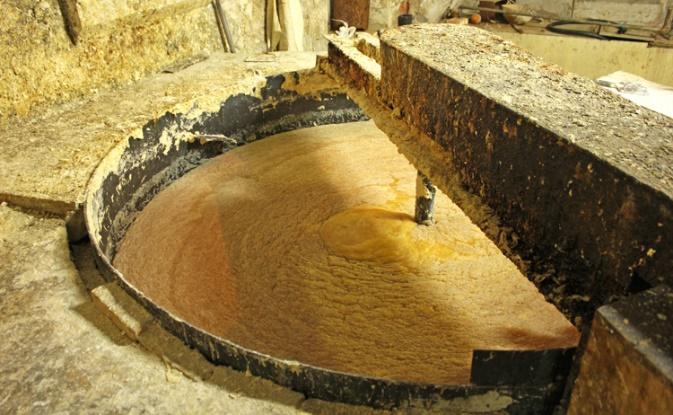 Basin for mixing the soap compound