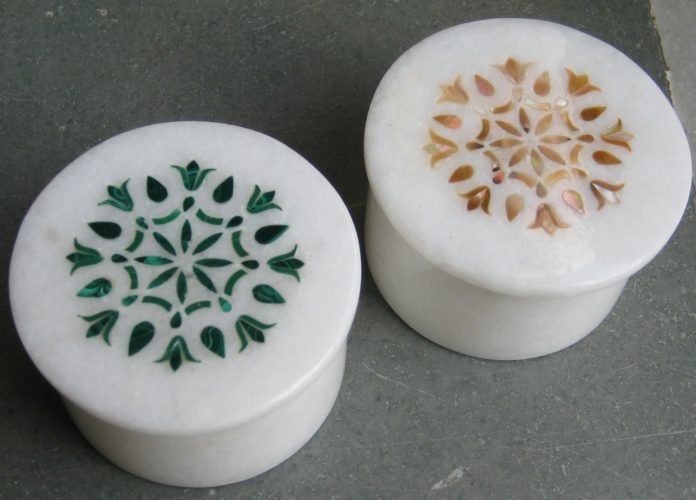 Many myths surround the making of the Taj Mahal, including the apocryphal tale of the Mughal Emperor Shah Jahan (1592-1666) having the hands of all those who had worked on the monument cut off to prevent them from replicating any part of it. Craftspeople in Agra, the home of the “monument to love”, continue to be famed for their intricate marble engraving with patterns inlaid in stone, both precious and other. This Florentine craft of Pietra Dura was introduced to India by expert craftsmen brought in by the Mughal Emperor from Persia, their adaptation locally called pacchi kari. 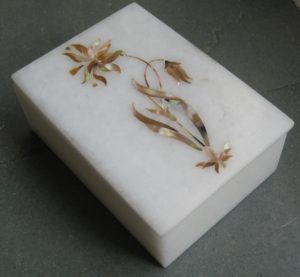 The craftspersons, predominantly Muslim trace their lineage to the inlay artists who worked on the Taj. Using marble quarried from the nearby town of Makrana, the process of pacchi kari involves the skill of several specialists for each time consuming step. The pre-etching process involves the shaping of the marble, the composition of the individually created design and the coating of the marble with geru, a fugitive red mineral colour that allows for the etched lines to stand out in contrast . Using the most basic of tools—a set of chisels and a set-square (no hammer being used)—the patterns are shallow carved. The semi-precious stones, including malachite, cornelian, jasper, pearl, coral and others, are ground and shaped on a hand-operated emery wheel to form the delicate elements of the pattern. Before laying in the stone the etched is filled with cement, the marble is lightly heated and the stone is set. 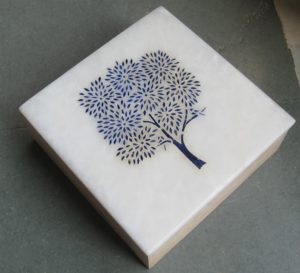 The patterning of pacchi kari continues to be inspired by the Taj Mahal with florals, vines, leaves, trees, geometric patterns and calligraphy predominating. The range of products crafted is diverse, including home décor, boxes, furniture and architectural elements of flooring and tiles to its application in luxury buildings and places of worship.