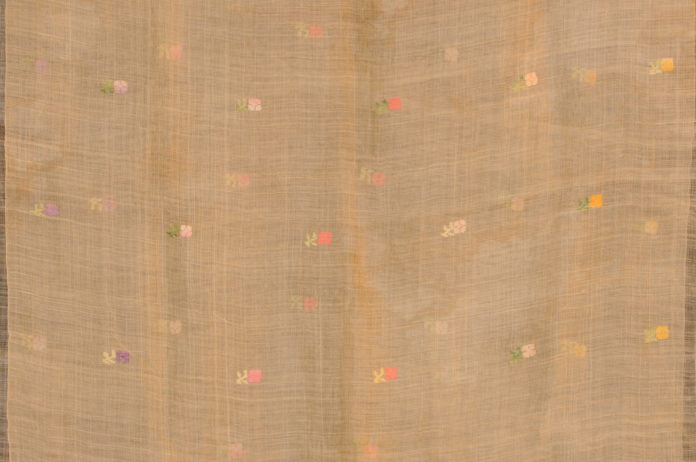 Piña is a handwoven Philippine textile produced mostly by the Aklanon in the province of Aklan in Western Visayas, Philippines. It is considered the finest of Philippine textiles mainly because of its delicacy and its natural creamy hue. It is made of fibres from the inner layer of the leaves of the native pineapple plant of the red bisaya variety (Ananascomosus). Some weaving is also done in Palawan.

The extraction of the fibres is a difficult process. A porcelain shard is used to remove the epidermis and expose the rough fibres. To extract the inner layer of fibres, the edge of a piece of halved coconut shell is run through the surface. Only long and fine but tenacious inner fibres are used to produce the delicate piña textile.

The extracted fibres go through a process of degumming. A bunch of fibres is repeatedly beaten with a paddle, then washed in the river before being air dried for easier separation into individual fibres. Each fibre is then connected end to end before these are counted and arranged on a long cylindrical warping frame. The fibres are set up for weaving on a long rectangular pedal frame loom. On the loom, the woven piña is embellished with floral patterns such as sampaguita buds and large peonies in suk-suk or inlaid supplementary weft design technique. Designs may also be hand embroidered with floral designs interspersed with calado patterns done with the drawn-thread technique.

Piña fibre as weft is often combined with silk or cotton as warp. The combination of piña and silk is what is popularly known as piña-jusi.

Piña is a popular dress material for barong—the long sleeved upper garments for men. It is the material for the women’s terno—a one piece dress with fan-shaped sleeves or an ensemble made up a long skirt and blouse with ample bell shaped sleeves. The President of the Philippines takes his oath of office always in barong of piña.

Susima de la Cruz of Kalibo, Aklan, is considered master weaver of the piña. Her masterpieces include the bouquet and crown of tiny flower designs plus petals of green. In her mid-90s, she still deftly connects the fibres with her hands. The weaving house gained prominence in early 2000 for combining degummed and rough piña fibres creating a textural interplay of smooth and rugged surfaces.

With the assistance of the Philippine Textile Research Institute, the De la Cruz weaving house spearheaded the use of natural dyes in their piña productions, such as indigo (Indigoferatinctoria) for blue, bark of the talisay (Terminaliacatappa) and kogon (Imperatacylindical), for yellow, and young coconut husk (Cocosnucifera) for brownish red.

Today some 150 Aklanons are in the production of piña textiles as compared to 300 people in the first decade of the twenty-first century.

By
Norma A. Respicio