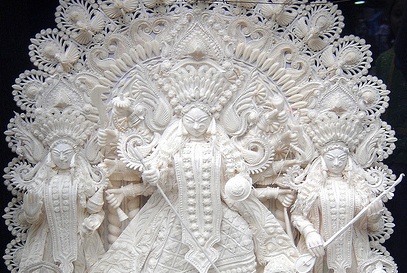 The craftsperson’s knowledge of seed and tree, grass and leaf and other plant material available in their surrounding habitats distinguish the making, skills and processes followed across the regions and climatic zones in India. The Indian cork (aeschynomene aspera), found growing in marshes, ponds and wetlands in humid climates is among the many reeds employed for crafting. This craft form, known as sholapith or sholarkaj in West Bengal and netti in Tamil Nadu, uses the core of the reed as its raw material. Its malleable ivory-coloured pith is crafted into a variety of objects from the decorative to the ritual.

In Tamil Nadu, the small town of Kumbakonam is rich in its tradition of stone, stucco and wood temples. It specialises in crafting the pith into miniature replicas of Hindu temples, and the ever popular Taj Mahal. As the customers expect “true” replicas, the principles of architectural model making, with every detail meticulously worked out, is closely followed by the craftsperson. The miniature, always in the natural ivory colour of pith, is cased in a glass box given the fragile nature of the raw material.

Practiced by the Malakar community, the craft of sholapith in West Bengal is an inseparable part of Hindu rites including marriage where both the bride and groom wear the auspicious sholapith carved crowns at the ceremony. A range of decorative objects are carved, especially flowers. But it is during the annual public religious celebration of the Durga Puja that the creativity of the craftspersons comes to the fore, with innumerable miniature Durga masks, huge elaborate goddess images, idols, toys carved for the festivities.

The technique followed to sculpt the pith in both regions is similar, as are the tools—a set of blades, knives and needles. However, sholapith carvings are often embellished and painted according to decorative, festive and ritual requirements.