Since very early times, the pottery industry has been one of the most popular traditionally inherited handcrafts. The Omani craftsmen took an interest in pottery due to its multiple uses. Omani potters were encouraged to carry out such industry by the availability of suitable loam. The archaeological excavations in bat village, near Ibri (a city in the region of Az Zahirah, in Northwest Oman) city, Al arjaa (a village near Sohar which is the capital and largest city of the Al Batinah North Governorate in the Sultanate of Oman.) and Al akhdar (a village near wadi Samad in Samad A’Shan (Wilayat of Al Mudhaibi) in Sharqiya Governorate. It is called Al Akhdar (“green “in Arabic, because of the luxuriant date palm growth around and atmosphere of oasis hamlet) village in Wadi Samad have proved that the pottery industry was widespread in these regions.

These excavations indicated that the pottery industry in these areas was contemporary to the ancient Sumerian civilization in Mesopotamia, such as Ur (an important Sumerian city-state in ancient Mesopotamia, located at the site of modern Tell el-Muqayyar in south Iraq’s Dhi Qar Governorate) and Jamdat Nasr (an archaeological culture in southern Mesopotamia (modern-day Iraq). It is generally dated from 3100–2900 BC.) regions. It was influenced by the pottery industry techniques existing then in southern Persia, which proves the existence of old trade relations between Oman and these other regions.

Pottery in Oman comes from four regions, each with their own distinct design and manufacturing methods. Geographically, in the upper left area of Oman, there are the works of the Bahla (a UNESCO World Heritage Site town, located 40 km away from Nizwa, and about 200 km from Oman’s capital Muscat which lies in the Al Dakhiliyah region of Oman) potters, which are very simple in shape and form. The colourful incense burners and the burnished water jars are the work of the skilled women of Dhofar (the largest of the eleven Governorates in the Sultanate of Oman in terms of area. It lies in Southern Oman, on the eastern border with Yemen) in the South, while the purplish smaller containers are made by the men of Musandam (the northernmost part of the Sultanate, is separated from the rest of Oman by part of the United Arab Emirates, with rugged mountains that rise up to 2100 meters above sea level) in the North. The small goblet and the gold-colour topped jar near the centre are from Muslimat (city near Nakal in Al Batinah Governorate). Bahla in Al dakhiliyah Governorate is the most famous town for pottery-making in Oman, as the clay is widely available there, and the soil of the nearby wadi is rich in red clay, that is used for making clay utensils. 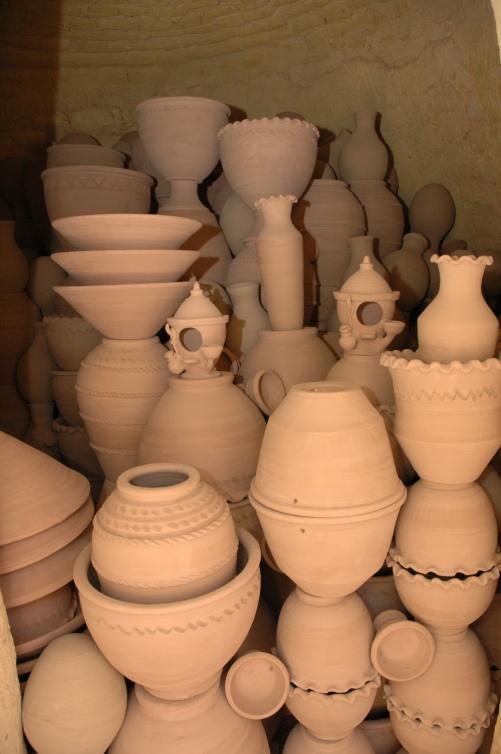 Generally, the art of pottery still strives in Oman in its most traditional and simple ways. This includes products which are unglazed with little decoration of geometric and arabesque motifs and simple Qur’anic words (Calvin H. Allen Jr:1987:18). At the present time, pottery items are mainly used as decorative pieces in restaurants, homes, and gardens or as a souvenir tourists bring back home from Oman. However, in the past, the traditional potteries were a necessary tool to be used in people’s daily lives and the art of vessel making was a complete industry in the Sultanate (Fullah Sunshine:2016)

Fullah, Sunshine. 2016. “Oman Culture: The Magic Art Of Pottery”. Times of Oman. Retrieved May 13 2017 from: http://timesofoman.com/article/88399/Lifestyle/Culture/Oman-Culture:-The-Magic-Art-Of-Pottery-in-the-Sultanate

Ministry of Social and Affairs and Labour. 1995. The Manual of the Omani traditional crafts and industries, first edition.