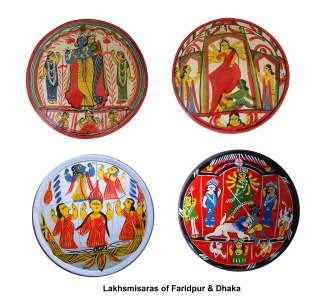 Most significant examples of ritualistic paintings of Bangladesh are patachitra, karandichitra, Lakshmi sar a, Manasaghat and alpana.

Patachitra is a painted story made by the Acharyas of Bangladesh and the Patuas of West Bengal. Both the religious and secular patachitras are distinguished by shape—jorano (scroll) and chouko (quadrangular).

The only existing patachitra that uses the ancient techniques of cloth-painting is the Gajirpata of Munshiganj.

Karandichitra is a small painting made by Malakars of Rangpur, Rajshahi, and  Acharyas of Mymensing for the worship of the goddess Manasa during Sraban Sankranti (last day of rainy season). Its rectangular, triangular or temple like two-dimensional structures are made with slices of shola (pith); paper is pasted on one side, and tales of Manasha and Behula-Lakhindar are painted on it.

Lakhsmi Sara is a kind of earthenware lid or plate with painted image of goddess Lakshmi (or Durga or Radha-Krishna) on its convex surface. Lakhmi Saras are made by the potter community of Dhaka and Faridpur districts for the worship of goddess Lakshmi at home, on day of Kojagari Purnima (full moon).

Manashaghat is an earthen pitcher with a painted image of Manasha (the snake goddess) made by the potters of Barishal and Bagerhat and used for the worship of goddess Manasha by the indigenous people of that region.

Alpana is a propitious folk painting derived from primitive magic-belief and still practised by the women of Bengal. For rituals and social occasions, women paint some symbolic motifs on the floor, wall and courtyard with their fingers.  Liquified powdered rice is used as pigment.

Arnoldsche Art Publishers Ethnographic Museum of the University of Zurich, 2012