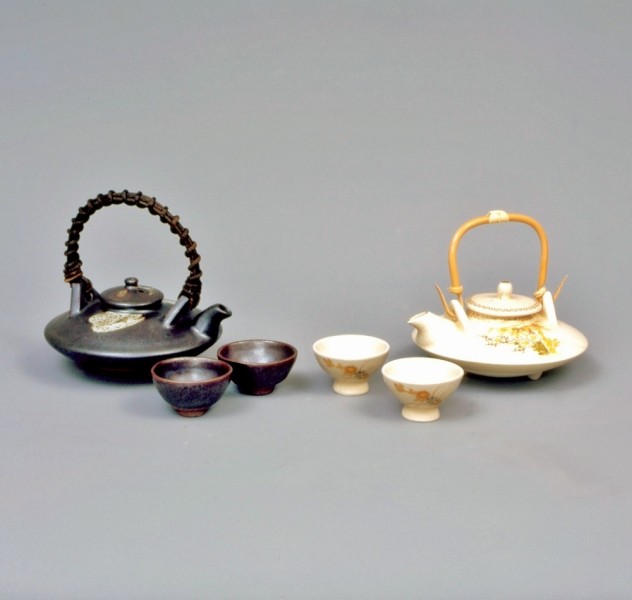 The origins of satsuma-yaki date back to the sixteenth century. The local feudal lord, Shimazu, returned from the Korean peninsula with some potters who helped to get things started. Satsuma-yaki developed in the region of Kagoashima for 400 years. In 1867, the Shimazu clan independently entered some pieces of Satsuma Yaki in the Great Exhibition in Paris. People in Europe were enchanted and soon the name of Satsuma became known throughout the world.

Today kilns producing work embodying a great variety of techniques can be found all over the prefecture. One of the features of this ware is the great variety of different types of pottery, which are being produced. There are, for example, six individual wares of a traditional lineage, namely Katano, Ryumonji, Naeshirogawa, Nishi-mochida, Hirasa, and Tanegashima. In addition, white satsuma-yaki, black satsuma ware and pieces of porcelain make up the three main groups of products being made in the area.

Satsuma-yaki has a variety of products. There are six historical line of brands of satsuma ware: Tateno, Ryumonji, Inawashirogawa, Nishimochida, Hirasa and Tanegashima. They are roughly separated into white wares, black wares and porcelains. Shiro Satsuma (white ware) has pale yellow colouring with a transparent glaze. Its surface is covered with small cracks. It may be dyed, enamelled or decorated with gold leaf. Kuro satsuma (black ware) is made by using combinations of black or brown coloured glaze. The body itself is dark brown since the clay contains iron.

With a faint yellow ground, white satsuma-yaki is a plain glazed pottery, which is covered all over with fine crazing. Colours, enamels and gold-work are then applied. Black satsuma, on the other hand, is a coloured pottery done with black, dark brown or amber glazes and has a darkish brown base colour because of the iron-rich clay, which is used.

The range of products is, of course, vast and includes all kinds of tableware, vases, decorative items and then special tea ceremony items and drinking sets.

Shiro satsuma is created from blended soil. This makes its unique colour which makes it appear like a crossbreed of porcelain and pottery. A fine clay is created by elutriation, which is a recurrent process of mixing the clay with water, collecting the precipitate, drying them and mixing them with water again. The clay is moulded by wheel throwing and other methods. The clay is biscuit fired, glazed and baked and then finished with painting. Kuro satsuma uses a different combination of soil from shiro satsuma. A clay is not elutriated when creating kuro satsuma, which gives it a more rustic touch of the soil.