Making of sesat, a large colourful circular fan mounted to a long decorated wooden pole used as a ceremonial sun-shade, is a unique craft in Sri Lanka. The Sinhala word sesat (singular -sesata) has derived from the Sanskrit shveta-chatra, meaning “white umbrella”. It is believed that the craft of sesat making was introduced to Sri Lanka in the third century BC by the Indian craft families that accompanied Theri Sanghamitta who brought the sacred Bodhi tree to the island. Today, the craft is practiced in only one village called Unaveruwa in the Matale district. 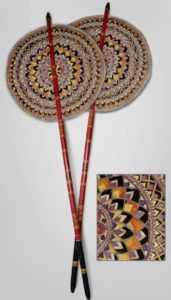 The leaves of the tala palm (corypha umbraculifera) grown in the area and sheets of mica were the only materials needed to make the circular fan component. Decorated wooden poles are prepared by lac-workers of Matale. Originally, craftspersons used vegetable dyes for colouring the palm leaves, but that has been replaced by imported synthetic dye-stuffs.

The process begins with boiling of palm leaflets that are separated from the stem and the midribs that turns its colour to a whitish hue and increases flexibility. They are dyed, wind-dried, and a part of them are cut into very narrow strips and braided around thinned midribs into several different designs.

The base of the fan is prepared by using another palm leaf with midribs and spread-out leaflets. Sheets of mica are stitched to the leaf using plant fibers and a needle. The braided palm leaf strips are placed over the layer of mica in concentric circles of either three or five or seven, and are stitched to the base. Then the areas between the circles are divided again using braided strips creating the traditional form of lotus flower. Two fans made as such are attached to each other (back-to-back) to create the fan part of the sesata. The diameters of the fan may vary as 13, 18, or 28 inches. The finished fan is attached to a wooden pole with lac-decorations.

Sesat is a cultural material unique to Sri Lanka, and is not found in any other country of the region. In the past, sesat had been used as a sun-shade to protect the king or high-ranking officials from sun’s heat. Today, they are carried in unison with ceremonial spears during religious processions and state ceremonies as a symbol of grandeur and solemnity. They are used at weddings and funerals to add grandeur. Sesat are also placed in homes to indicate the owner’s wealth and social status, as a relic of an ancient feudal society.

There are about 150 craftsmen belong to about 100 families at Unaveruva who practice the craft. Visitors can see sesat at the Colombo National Museum, Kandy National Museum, and the Temple of the Sacred Tooth Relic in Kandy. One can buy sesat at major souvenir shops in Colombo and Kandy.