Wayang kulit or shadow play is an art form most often associated with the northeastern state of Kelantan in Peninsular Malaysia. It is here also that the art of making two-dimensional puppets may be seen. A complete wayang kulit set consists of approximately 60 puppets representing the principal characters of Hikayat Maharaja Wana, a local version of the Hindu Ramayana epic, several minor figures, as well as stage properties, the most important being the leaf-shaped pohon beringin or “tree of life”. Wayang kulit figures are generally symbolic rather than realistic. The principal figures, representing semi-divine beings and ogres, exhibit features derived from indigenous Malay, Javanese and Thai traditions.

Standing approximately 70 cm (28 inches) high and 30.5 cm (12 inches) wide, wayang kulit are constructed of cow or goat hide. Only a single arm is articulated in most figures. Once the animal hide has been dried following the removal of all flesh, it is scraped until it becomes nearly translucent. A tracing of the figure to be made, usually in profile, is gummed onto a piece of skin of a suitable size and the outline of the character cut out with a small knife. Simple tools are then used to create costume items and accessories on the figure. Once a puppet has been shaped, it is painted and a spine and mobile arm are attached. Traditional dyes, derived from wood, bark and leaves, have given way to enamel paints and, more recently, marker pens.

The perforations and bright colours of the puppets allow them to be clearly seen from the audience’s side of the white muslin screen (kelir), which is lit by a single suspended light bulb, as the puppeteer (dalang) manipulates the puppets and together with narration, music and dialogue presents his story.

With the decline of the shadow play in recent decades, the art of crafting puppets is maintained by only a handful of artists, the best known being Yusof bin Mamat, also known as Pak Nasir, of Kampung Mesira, Tumpat, Kelantan. 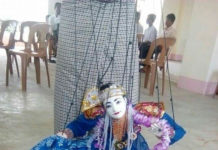