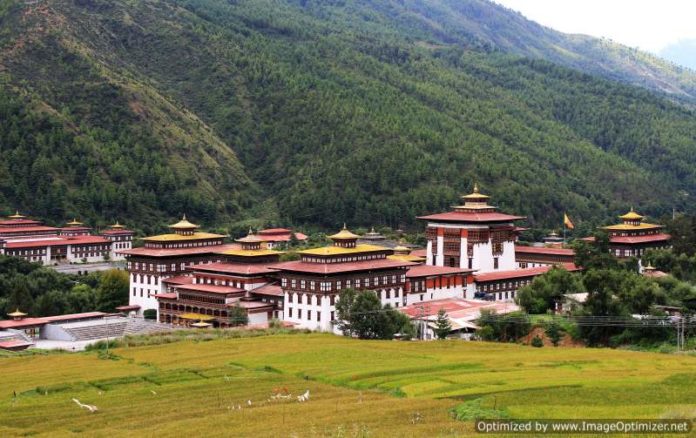 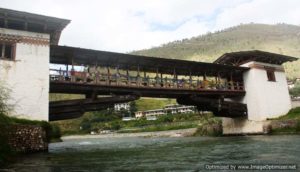 Local construction materials to build dzongs, temples, houses and bridges mostly consist of timber or wood, stones and rammed earth.  Different varieties of wood timber are easily available in Bhutan. The most common timber used for construction is blue pine wood. Hardwoods like teak and walnut are mostly used while constructing temples and dzongs. Timbers is used extravagantly for structural designs including windows, doors, stairs, balconies, beams and ornate decorative cornices below the roof and above the doors.

Houses, dzongs, temples and bridges in the country represent some of the finest examples of woodwork in the country. The designs of woodworks are appreciated for their uniqueness. Large dzongs which are found across the country were built in early days simply using timber without any nails or metal fasteners. Instead, the timbers were joined using notches with thick pegs and nails made of wood. These wooden structures were designed to last for centuries.

The dzongs were constructed without any architectural drawings. Many dzongs were built in the seventeenth century during the reign of Zhabdrung Ngawang Namgyel (the founding father) in various districts in the country. Trulpai Zowo (master carpenter) Balep is even today revered as a great craftsman for his architectural skills exhibited during the construction of Punakha Dzong in 1637. Dzongs still serve as both as administrative and religious centers in the districts.

Master carpenter (zowopon) does everything from designing, measuring, craving till completion of constructions. Zowo still plays a vital role in construction of houses in villages across the country. Every village in the country has its own zowo or master carpenters. They are still called upon by the government for their contribution while constructing important structures like lhakhangs (monasteries or temples) and dzong renovations. Bhutanese still practice the art of ShinZo.