Stone carving is relatively a less popular art among contemporary Sri Lankan crafts, although it had been widely practiced and had reached the highest levels of perfection during the early and middle historical periods as seen in sculptural remains at archaeological sites of Anuradhapura, Polonnaruva, and Yapahuva. Continuity of the stone carving tradition making monumental, religious or decorative sculpture seems to have been interrupted in the late-historical period.

Lately, a small number of sculptors in different parts of the island have begun to revive the art of handcrafting of stone sculptures of the Buddha, Hindu deities such as God Ganesha and various other figures. They make small figures of animals as ornamental sculpture. They also hand-carve tomb-stones and memorial plaques that have a good demand. 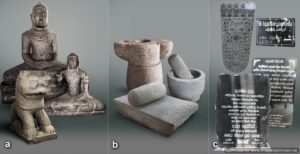 Presently, stone carving as a fine art is practiced by trained sculptors. Some of them are graduates with degrees in Fine Arts. They use granite, gneiss, and dolomitic rocks, and employ traditional carving tools as well as power tools. Some of their work show inspiration from contemporary artists in other countries.

Stone carvers make grinding stones known as miris-gala (lit. chillie-stone) for household use. It is a flat rectangular slab of stone with a smaller cylindrical roller-stone, both with slightly roughened surfaces to grind chillies and other spices. As Sri Lankans prefer the taste of spices made on the grinding stone to that of machine-ground spices, the local demand for grinding stones is going to remain steady at least for several decades. Stone craftsmen also make mortars and pestles, and another form of grinding stone known as kurahan-gala used mainly to grind Finger millet, but their use is becoming gradually less every day.