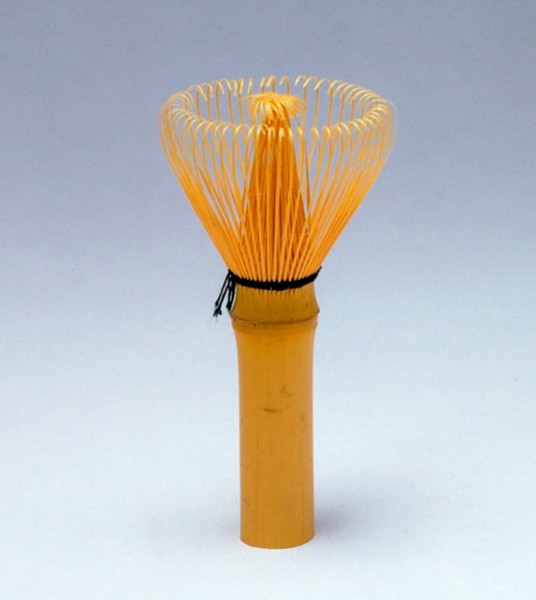 The making of tea whisks began in the middle of the Muromachi period (1333-1568), when the younger son of the lord of Takayama was asked to make a whisk by Murata Juko, who had been instrumental in perfecting the tea ceremony. Thereafter, the production method was kept a guarded secret by the lord of the castle and his family and was carefully handed down from generation to generation.

However, sometime later the secret was revealed to sixteen of the family’s chief retainers and the techniques were passed on without interruption. Takayama is now the only place in the country where tea whisks are being made.

There are about 120 different kinds of Takayama Chasen, the type of material, shape and number of splines varying according to the school of tea, and also on the kind of tea, whether it is weak or strong, to be served in very formal surroundings or at an open air tea ceremony, or if the whisk is for a travelling set. The taste of the tea is also said to differ slightly according to the workmanship during the whittling process. A part from the traditional whisks, some are now made for decorative purposes, while others are made to produce a good head of froth on milky coffee.

There are 120 types of Takayama chasen. The materials, shapes and number of ears vary depending on the tea ceremony school and the intended use (whether they are meant for light “matcha” tea (usucha), for strong “matcha” tea (koicha), for tea offerings, for open air ceremonies, for tea box and so on). Furthermore, based on the end results of a process known as “taste shaving,” the taste of tea itself may even vary slightly.

The bamboo to be used as material is cut to different specifications; the part that will be made into the ears, depending on the style and the intended use, is divided finely with a knife in between 60 to 240 pieces, which are then warmed in hot water, pared down with a knife so that the ear tips become gradually thinner and then bent with the help of a spatula. Every other corner of the ears is chamfered and every other chamfered ear is woven. Once the tea whisks have been woven, they are completed by cleaning them. All these operations are performed by hand. The process terminates with the conclusion of the eighth and final stage.