Intricately carved large vertical wooden slit drums of stunning appearance are possibly Vanuatu’s best-known art forms in the outside world.  From the island of Efate northwards (cultures in Vanuatu tend to measure distance from south to north) —an area covering just over one hundred currently spoken indigenous languages—almost all cultures had or still have wooden slit drum orchestras of varying types as part of their normal cultural riches for ritual use on village dancing grounds. On Efate and the central islands, the orchestras consisted almost exclusively of large vertical drums. Modified forms of this arrangement existed on Epi and Paama, and today on Ambrym. On Malakula, the great range of slit drum orchestras consist of larger vertical drums combined with smaller horizontal ones. Almost all other cultures north of this area, as far as the Torres, have purely horizontal undecorated slit drum orchestras. An exception to this pattern is found amongst peoples of southern Pentecost where the largest horizontal slit drum in the orchestra is brought partially upright on a trestle for beating during male graded society rituals. The southern islands do not produce slit drums (cultures on Tanna can use the earth itself as a form of drum, thus negating the need to make drums for ritual). 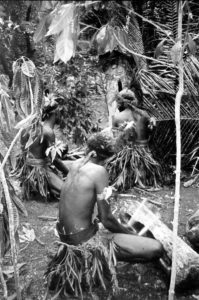 The general term for slit drum in Bislama, Vanuatu’s lingua franca, is tamtam. Each indigenous language, however, will have its own basic terms  (tuki in part of south Efate, napk’w’éa on Nguna Island, atingting in parts of Ambrym and nambwé in parts of northeast Malakula) upon which extremely complex naming additions are built according to the precise type of drum and possible decorations.

The most common type of wood used is from the breadfruit tree, Atocarpus altilis sp. There are local varieties that are light in weight and colour and also heavier and darker varieties: drums carved from the latter last longer and give out a better tone when beaten. Some cultures can use ironwood (Intsia bijuga sp.), which is extremely durable and also very heavy. Carving is a male only activity, done in a restricted area where females are not permitted. The most difficult and time-consuming work is the carving out of the interior through the narrow playing slit. Sometimes red-hot heated rocks are inserted making the charred interior wood slightly easier to scrape out. If it is to be a vertical drum from, say, Malakula or Ambrym, a spirit or ancestral face of the relevant culture’s type will be carved at the top.  The actual meaning of such a face, and of the drum itself, varies from culture to culture. In some cultures such “personalized” drums may represent the ancestors in general, or the sponsor and ancestors of the lineage that sponsored the drum to be carved, or the lineage of a particular men’s hut, or a chief himself (and his lineage). The list of variations is long. The slit that is beaten is the mouth of that spiritual or ancestral being or group, and thus the sound can combine elements from the World of the Living as well as from the World of the Dead. Strict and ancient traditional copyright laws control who may sponsor/carve/use which types of drums, their decorations, and the form of orchestral arrangements.  A certain amount of brave innovation periodically succeeds, within strict cultural parameters, in introducing changes in decoration styles as part of intense traditional cultural competition between men of status supported by their lineages or groups.

Beautifully complex intertwining drum rhythms can make the air and earth vibrate during lengthy grade-taking and other rituals. The drums can also be used for sending coded messages, which can be forwarded on and even sent from island to island. Mobile phones have taken up much of this latter use, but drums need to be kept for when the modern technology breaks down—and for regular ritual use. They are an extremely important element of local cultural identity.

Examples of many of the decorated drum styles can be seen on display in the National Museum of the Vanuatu Cultural Centre in the capital, Port Vila, and at the Malakula Cultural Centre in Lakatoro. Slit drums from Ambrym are also widely seen as imposing decorations around the hotels in the capital and in the other town, Luganville, on the island of Santo.  It is relatively easy to purchase excellent quality Ambrym slit drums of almost all sizes—from the large ones down to miniaturized ones— in the capital. Ambrym slit drums (like the circular pig’s tusk) have become sort of “cultural symbols” of the modern nation of Vanuatu, and can be seen displayed in museums and galleries in New York, London, Paris, Cologne, Basel, Vancouver, Chicago, Sydney, Canberra and Nouméa. They have become Vanuatu’s most widely recognized and admired overseas ambassadors. A “down” side of this national and international popularity, though, is that overproduction of slit drums of breadfruit wood on Ambrym is beginning to seriously threaten the sustainability of stands of the trees on areas of the island.

The author would like to dedicate this short text to the memory of Chief Willy Bong Matur Maldo, of Magham, north Ambrym, founder and first president of the Malvatumauri (National Council of Chiefs), who passed away 11.6.09; and to Chief Murmur of Mangaas/Mangaliliu, NW Efate, who passed away 18.12.15: he was instrumental in the re-awakening of slit-drum carving in north Efate after a gap of nearly a century.