Tanggeomjang refers to the craft of making tanggeon, a type of hat to be put on before wearing a gat, and worn by men with formal attire at home. It covers the man’s topknot and supports the gat. Tanggeon are usually made of a horse or cow’s tail hair.

The tanggeon is knitted on a wooden frame places on a cylindrical workbench, which is cushioned with felt. It is knitted from bottom to top. Once the weaving is finishing, several hairs are bound and cut at each warp to provide a hem. Before finishing, it is boiled to maintain its shape. After being boiled, the hat is dried and dyed with black ink.

The tanggeon is made in Jeongju and Anju in Pyeongan Province, Nonsan and Gimje in the Honam region and Jeju Island. The tanggeon from Jeju Island is particularly famous because the quality of Jeju ponies’ tail hair is fine, but durable, as well as soft and smooth. Tanggeon can take a variety of forms: a single folded one, a double folded one, a delicate cross-patterned one with a square design. This last is created using a double, triple or quintuple knitting technique. Sometimes it can be worn on its own as a hat.

Tanggeon is also known as a gamtu. The expression “Putting on a gamtu” refers to the attainment of a position in government. There are three types of tanggeon: hottanggeon (single folded hat, gyeoptanggeon (double folded hat, and baduktanggom (cross patterned hat).

The demand for the tanggeon declined after the law in 1895 prohibiting topknots. But it still continues on Jeju Island, where the women usually start to learn the art of hat-making at the age of ten. Designated masters are Lee Su-yeo (Samyang-dong, on Jeju Island), Kang Jeon-hyang  (Jeju Island), Kim Gong-chun and Kim Hye-jeong. 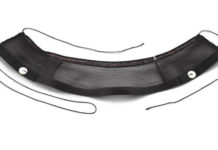