The art of tapestry named shwe chi hto (gold embroidery) seems to be flourished about one thousand years ago. Evidence can be found in the mural paintings of Bagan Period (107-1368 AD), Myanmar long verse called WannaPabaRatu composed by the greatest poet, AshinMahaRatthaThara of Inn-wa Period (1364-1555 AD). During the reign of King Mindon( 1853-1878 AD), the diplomacy with the West further flourished and the art tapestry was rapidly and highly advanced.

Tapestry is created not only with traditional cotton silk fabric but also with velvet and satin with ornaments such as gems and sequins. The work of tapestry created by ancient artisans does not fade out the ornaments are not taken out, and the sewing lines are not worn and torn. It is a form of needlework to create a variety of pictures and patterns so delicate and detailed that it requires skill, artistry and patience. 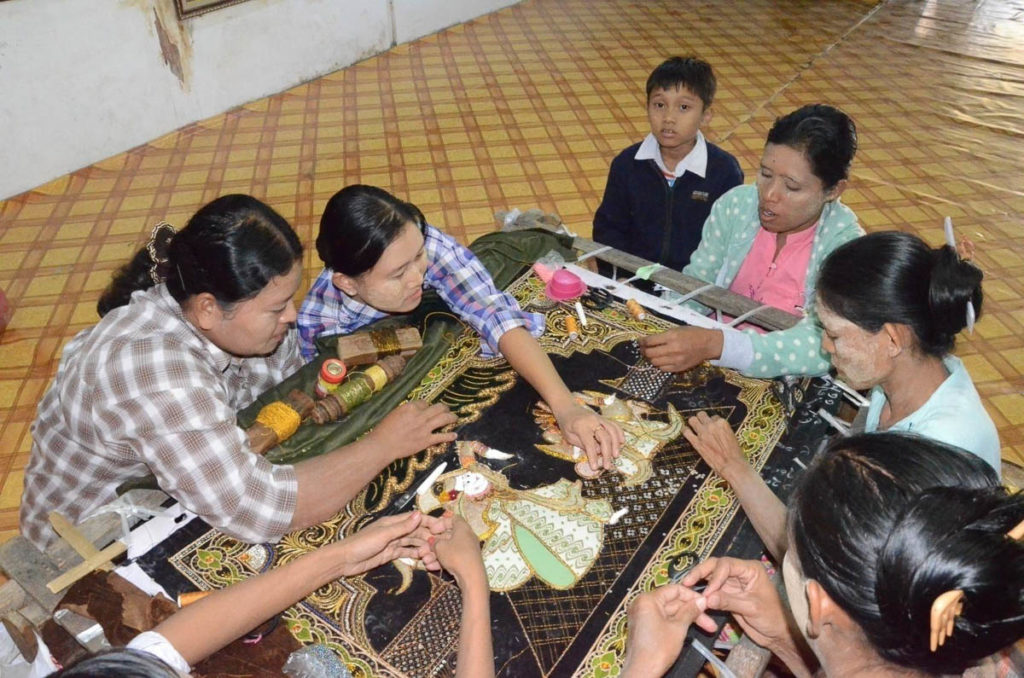 To create an artistic piece of traditional Myanmar gold thread embroidery one needs a piece of white cloth of suitable proportions that has to be stretched and tightened on a square wooden frame. Then on the rigid and smooth surface, the figures or desired patterns are sketched in outline with charcoal or pencil. In ancient times, the basic designs were floral patterns, including vines and curlicues. The sketched outlines are then stitched over with gold, silver or coloured threads. This is the edging or border of the central picture of the embroidery. Then the ornaments that are sewn on such as silver stars, sequins, cut glass, beads and seed pearls to bring the picture to life. This part of the embroidery is called a yoke cha gyin. This literally means “laying down the figure”. Then the stitches are brushed over with glue on the underside to strengthen and prevent the threads from breaking. It also makes it easier to cut out the figures separately. The cut figures or pictures are then appliquéd on the piece of velvet or satin or silk which will form the background of the embroidery. However, an opening is left through which cotton is later stuffed to make an embossed figure. Other adornments include sequins and beads. Seed pearls and semi-precious and even precious gems are added around the figure which is the central theme of the embroidery to form a backdrop. Depending on the main figure or theme, this backdrop could be a palace or a pond. Sometimes a colour painting or a patchwork of coloured velvet is worked into the picture. The gem-studded embroidery has to also call upon the work of gold and silversmiths. So rather than the work of a single craftsman, a picturesque Myanmar tapestry is a cooperative effort.

In Myanmar, we can see traditional tapestries in hotels, companies and museums. Foreigners like them very much.