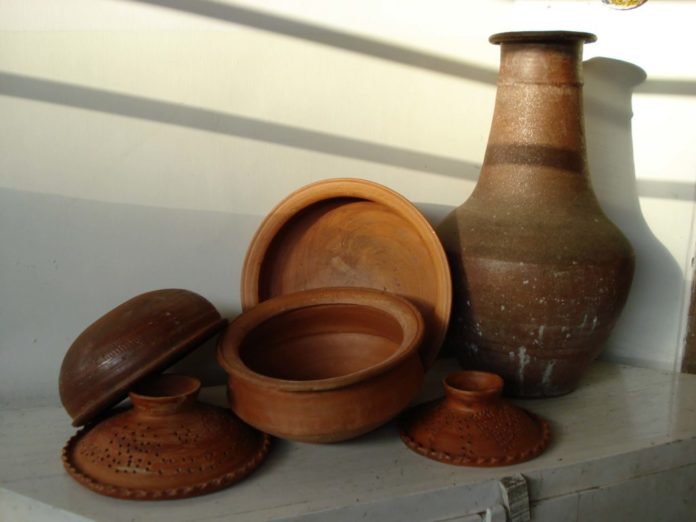 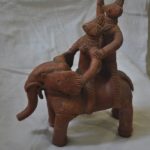 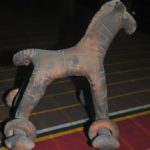 The absence of stone and availability of clay made terracotta a most important medium. Early pottery was formed through the pinch process, wheel thrown pottery appeared later. The earliest pottery discovered in Bengal was decorated. Terracotta figures and toys have been found in the archaeological sites of Bengal. Small terracotta figures can be classified as the “ageless” type and “time bound variations”. The former being pinched into form and not showing much change, continues to be made at present. The latter shows evolution of form and technique. The terracotta temples of Bengal are unique in architectural form and decoration. Kumars are the traditional Hindu potters of Bengal. Muslim potters, much smaller in numbers, are called kulals. Facing stiff competition from industrial products and beset by many difficulties, potters continue to produce wares though there is a decline in quantity and quality. 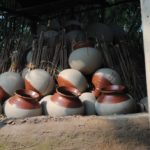 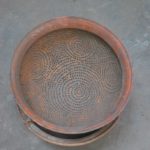 Pottery is produced in all the districts of the country. However, different villages produce specialized wares. For example, the potters of Maheshpur of Patuakhali only manufacture plates, Bijoypur potters manufacture cooking pots while Bijoypur, Kakran and Baufal produce more contemporary ware.

Bangladesh has huge deposits of clay found on river banks or by excavation which is collected and processed. All members of the family are involved in the production process. The lower parts of most pots ares fashioned by clay beaten into molds while upper parts are wheel thrown. Large pots are formed by paddled coils. Dolls are pinched or pressed from molds.

There is huge variety in the shape and decoration of pottery and figures.