Al-Sadu weaving is a traditional handcraft, which is mainly practiced by the Bedouin women of Kuwait to construct their family home tents, Bait-al-Shaar (House of Hair), its furniture and decorations. This weaving also produces their horse, camel and women’s camel saddle (hodaj or dhalla) decorations. Al-Sadu weavings are constructed using sheep wool, camel and goat hair as the local natural fibres. Those fibres are either sheared or collected by men, while the cleaning, spinning, dyeing, and women do weaving with these fibres. A simple floor loom is used to practice this traditional handcraft.

The bisht weaving (Al-Hayek) is another highly important traditional handcraft. Men solely practice it. A master bisht weaver works on a wooden pit loom. The Hayek often uses ready-made yarns of sheep wool or camel hair that are colored with natural dyes to weave about nine meters of bisht fabric with the width of one metre to make one bisht for an adult. Winter bishts are often made with heavy wool or camel hair. However, summer bishts are made of thin yarns to weave sheer fabrics.

Bisht tailors (khayat) take the bisht fabric to make it into proper bishts to fit their consumers. The tailoring process starts with taking the measurement of the consumer. Next, the bisht fabric is cut into two equal part to cover the front and the backsides of the consumer, while he is extending both his arms to his sides. Then the two fabrics are sewn lengthwise to make the bisht. The length of the bisht is determined by the height of the consumer’s shoulders from the ground. Finally, the Khayat uses golden metal threads or manufactured silk threads to finish the shoulder and hand boarders, as well as, the neck and chest embroidery and tassels. Expert artisans often do bisht embroidery, and then expert tailors tailor it to the bisht.

Tailoring male and female cloths (khayatah) is another vital handcraft that continues to be in high demand. Those tailors are capable of designing and sewing male formal and casual cloths such as the dishdashah, shirts, jackets and pyjamas. Likewise, female tailors can satisfy the dress needs for females of different ages and for different occasions and uses.

Al-Naddaf or Al-Qattan (upholstery) is a male handcraft that continues to be practiced, but at a lower level of demand than before. Originally, an artisan working in this handcraft uses a bow and a wood beater. The naddaf places the bow in the pressed pile of cotton, and then hits it with the beater to make it vibrate and help loosening the cotton fibres and improve its quality. Upon request, the naddaf uses his softened cotton to make traditional mattresses and pillows, as well as traditional types of quilted blankets called modarrab. He uses fabrics of different colours to make the case for the blanket. Currently, cotton stuffing is replaced with sponge to make most kinds mattresses and pillow as well as to upholster chairs and sofas.

Weaving cranial crocheting (qahfiah making) for male use has been practiced mainly by women before it becomes machine made. Men’s cranial is usually dressed on a man’s head under a white or colored piece of fabric called khotrah, which he wears to protect his head from the sun heat, and as part of the national dress of Kuwaiti people. Cranials are usually crocheted with white cotton thread, yet, currently they are crocheted with different collared threads.

Women’s cloak tailoring (abayah making) is a quite traditional handcraft practiced by both male and female skilled tailors. It is normally made out if black synthetic fabrics to cover the entire female’s body as a sign of becoming a grown-up woman. The fabrics of the abayah is often imported from different Asian and European countries, then the fabrics get sewn based on customer’s request. A grown-up female will place the abayah on her head and cover her body. Currently less women are wearing the abayah because it has been replaced with another piece of cloth called the mantoo. The new outfit is tailored in the form of a longs and wide dress with long sleeves that comes with different styles and colors.

Women’s over-dress (thoub) tailoring is another handcraft which is dying out at the present time due to the fact that younger generations have chosen to change their dress styles from the traditional one to the contemporary one. The thoub can be made with sheer fabrics of different colours and styles. In addition, it is constructed with different beautiful traditional designs like flowers, stars, and golden coins. The casual and the special occasions’ athwab (plural of thoub) are the two major types, which are dressed by middle age and older women. The causal ones are made of plain sheen fabrics, which are mostly black in color. However, the other type has various different designs and made out of colorful sheer fabrics. 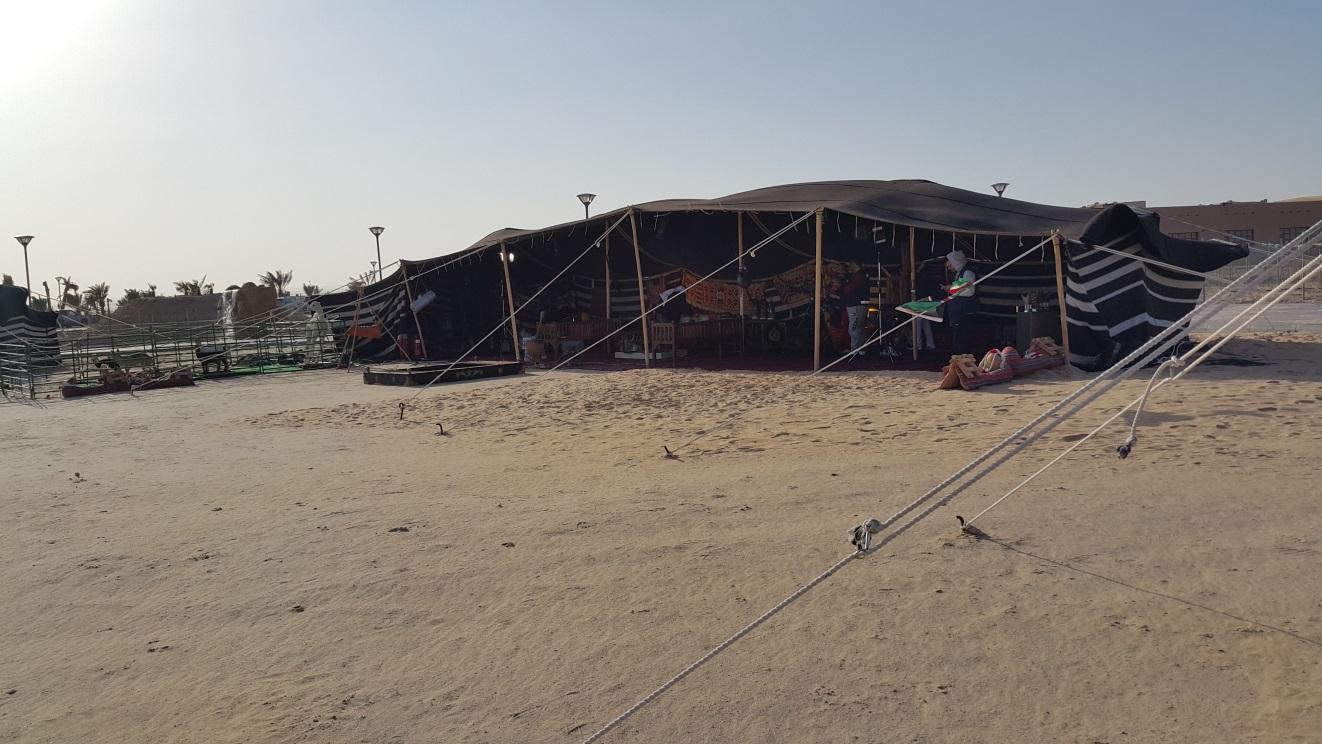 A-1) The Bedouin home of Bait-al-Shaar. 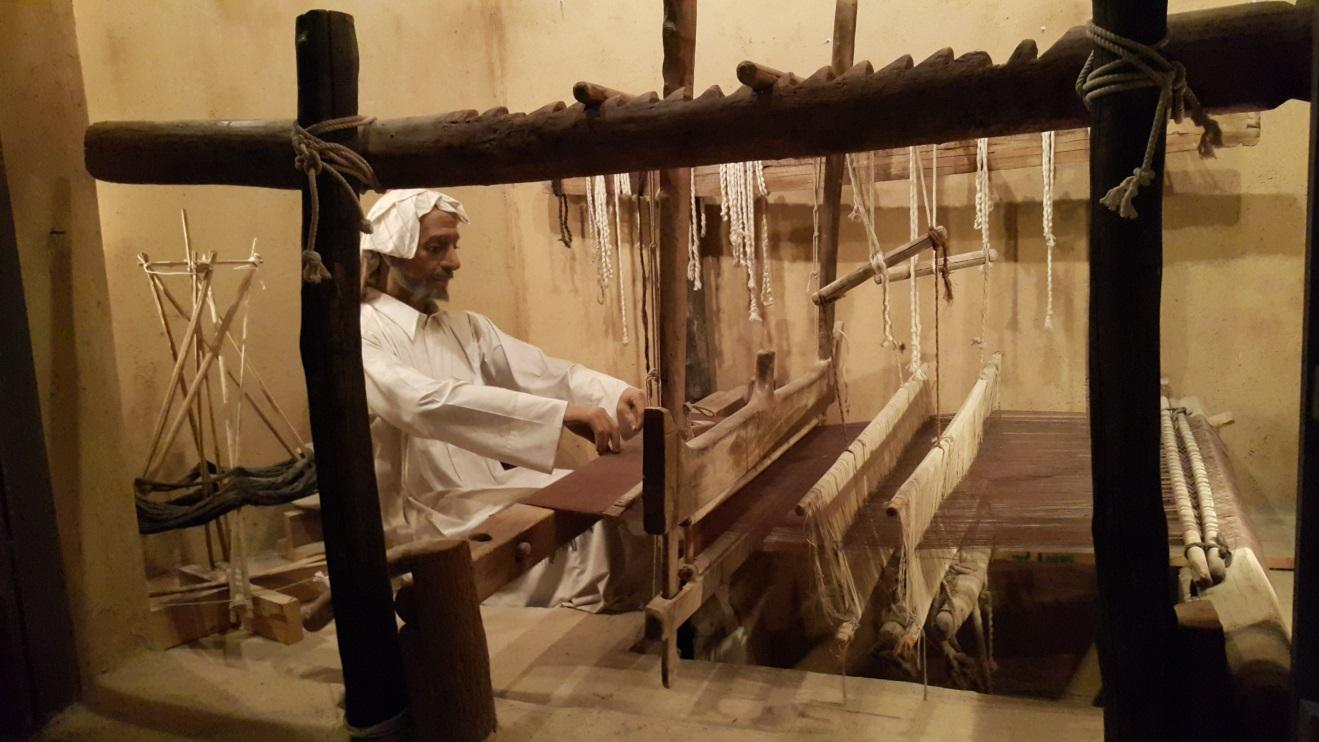 A-2) Bisht weaver (Al-Hayek) weaving on a typical pit floor loom. This picture is taken from the Popular Traditional Museum in Kuwait National Museum. 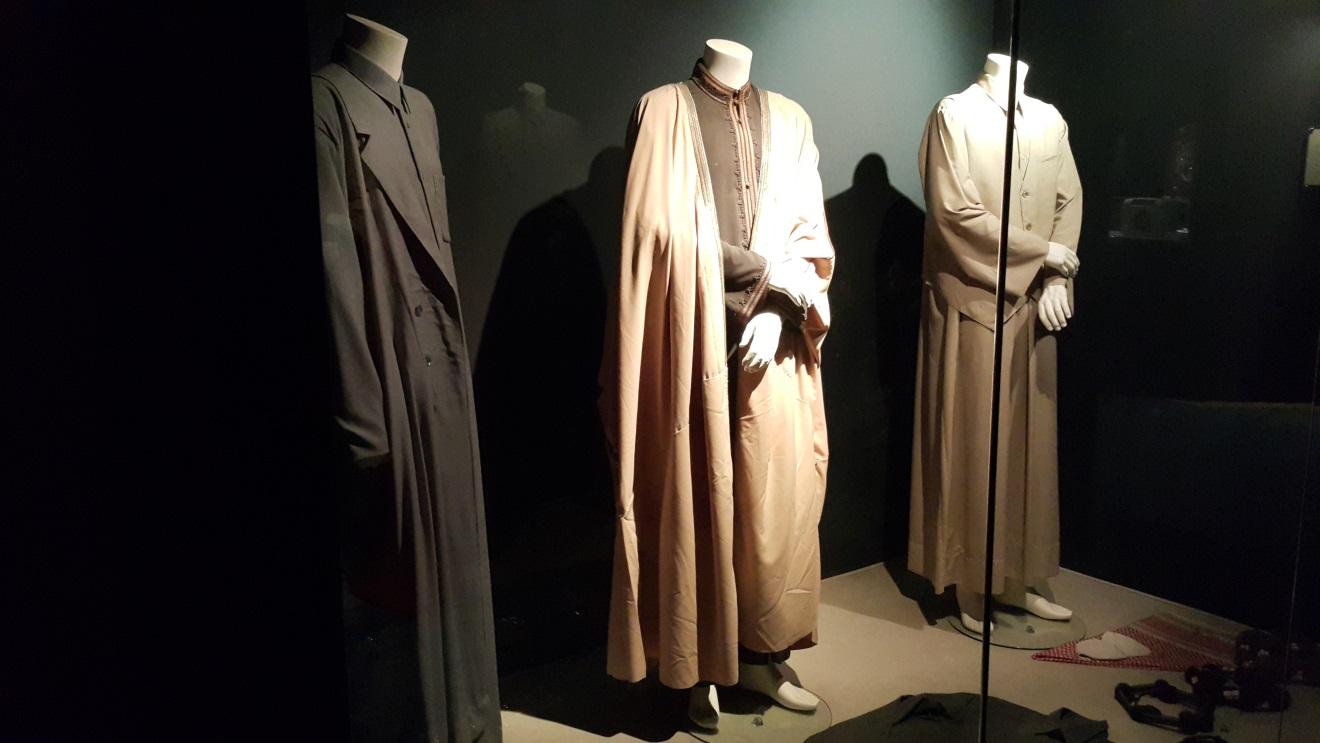 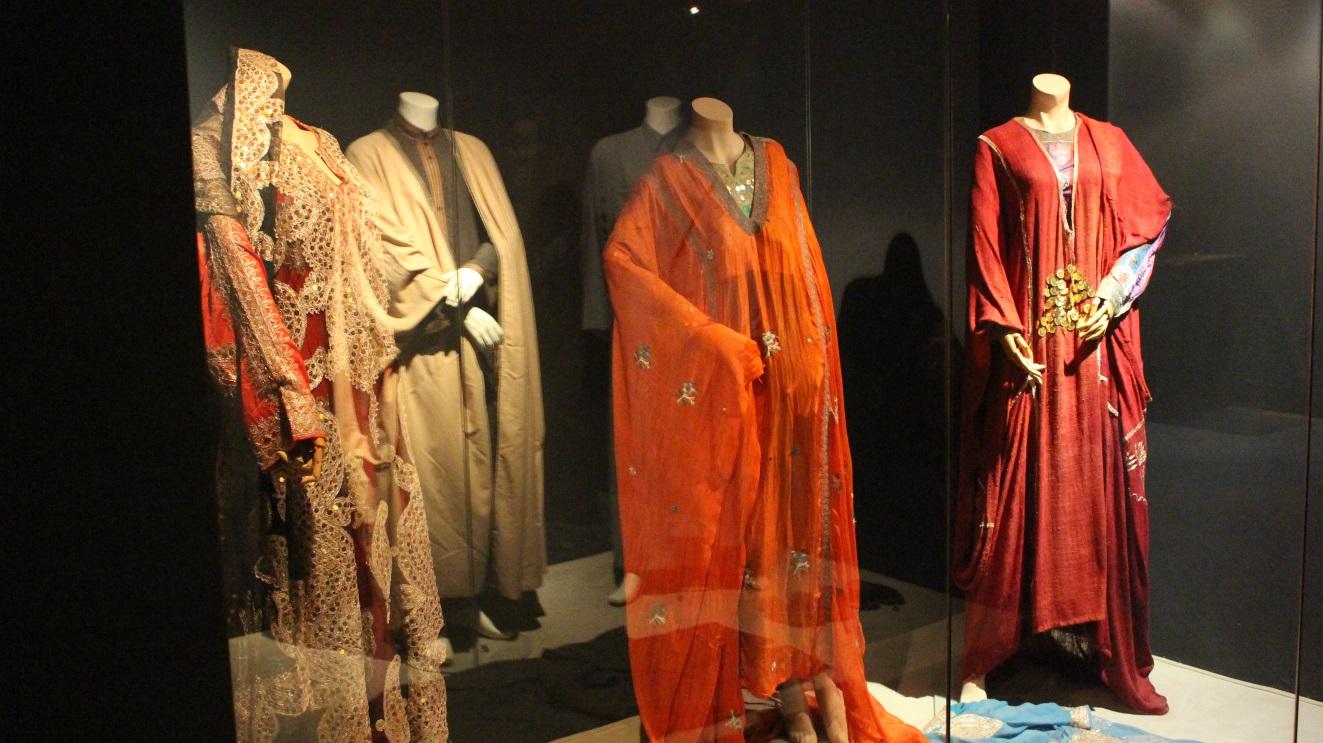 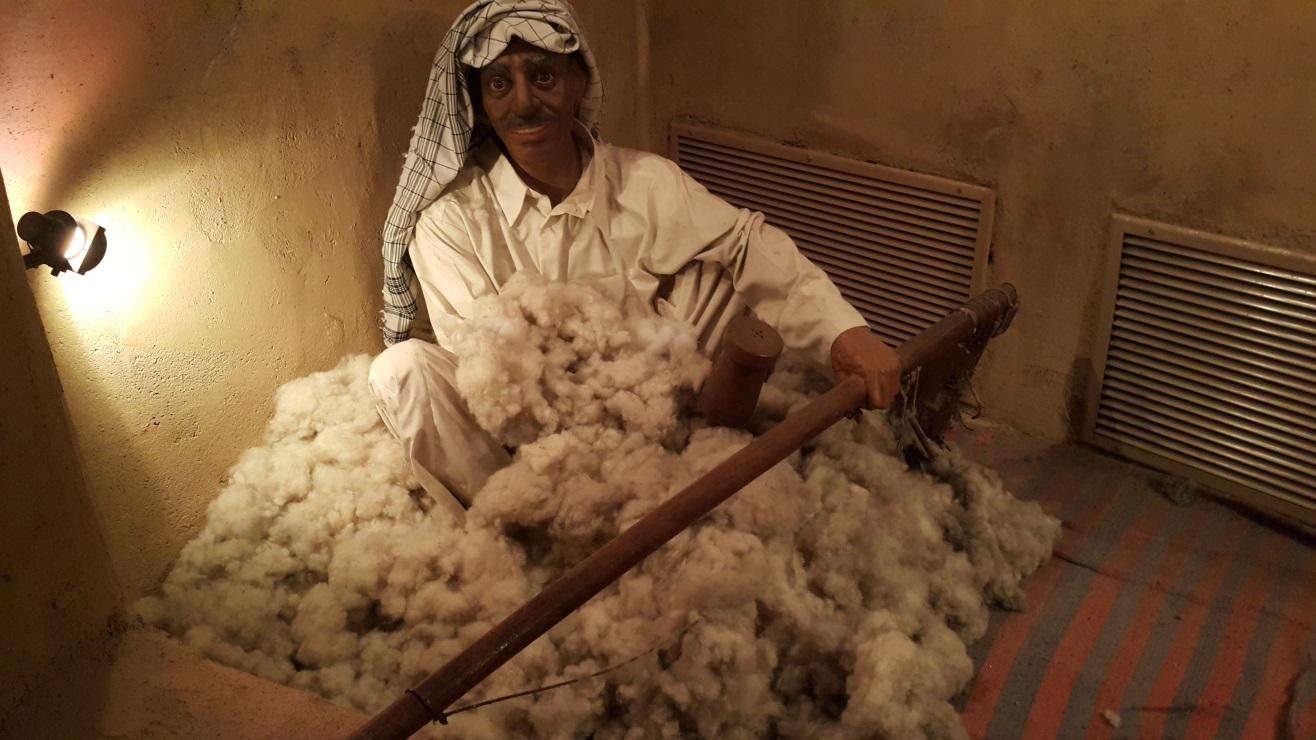 A-5) Al-Naddaf or cotton candar loosening up compacted cotton. This picture is taken from the Popular Traditional Museum in Kuwait National Museum.