As Polynesian women took charge of fabricating the new items of ceremony and exchange, fabric was given the form of large rectangular patchwork coverlets called tivaivai (tifaifai) whose production and circulation has remained an essential part of life in Tonga, the Cook Islands, Tahiti and Hawaii to this day. Cook Islands patchwork have remained the most varied and expressive art form sewn to be gifted at all important life cycle events. Boys are made to sit on a tivaivai for their first hair-cut. Tivaivai are also gifted from mothers to daughters and sons at weddings and are wrapped around the dead at death, to be buried with the body in the grave. 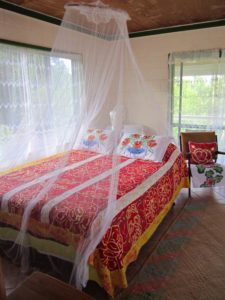 Patchwork quickly became the dominant icon of modernity and an index of an emerging national identity as it entangled fruitfully conceptions of cloth and clothing with existing preoccupations with wrapping the body. This lead to design innovations that made full use of the material and technical potential inherent in plain coloured fabric and thread. Every coverlet is made to be gifted, and is often sewn with a specific occasion and even a person in mind as recipient. Fanning out during a woman’s life, such relations are externalised into patterns that become iconic of events and biographical (friends) as well as genealogical relations. Patterns related to specific events may be repeated later on in life from memory, recalling the pattern in terms of the flower depicted and the symmetry used. In the case of a piecework coverlet, which is composed of many thousand small pieces, memory is evoked by the coloured pieces of cloth which are to be joined to one another to make up the nucleus (pu) of the design, which is repeated across the surface of the quilt. The surface of such a coverlet consists of amalgamated replications of itself, within each “nucleus”. The image consists of itself, replicated on a smaller scale, within its own interior cavity. Like the fractal image of personhood presented to us in the historic sculpture of the A’a, the Cook Islands quilt is an entity with relationships integrally implied in the ways motifs are interconnected. Constructed from layers of criss-crossing strips of fabric that are cut and stitched into regular crystalline patterns on a plane, the Cook Islands patchwork presents the temporal equivalent of a spatial map in the form of a lattice of possible worlds. As such, patchwork makes tangible a notion of personhood as the aggregate of external relations (the outcome of genealogy, fanning out in time and space) and its social effects, creating a society without boundary able to embrace life in the diaspora in the most positive of ways.

Tivaivai are not visible to the visitor. Coverlets are kept folded in treasure trunks, to be taken out to be gifted between members of the extended family. They are displayed at competitive tivaivai events hosted by women at regular intervals between villages and churches. Eventually they are wrapped around the body in the grave. The fabrication and gifting of tivaivai is today as lively in the metropolises of Cook Islands diaspora as it is in the islands where the scale of labour migration has impacted the scale of production.

Küchler, S. and A. Eimke 2009. Tivaivai: The Social Fabric of the Cook Islands. London and Wellington: British Museum Press and TePapa Press.

By
Susanne Kuechler and Andrea Eimke