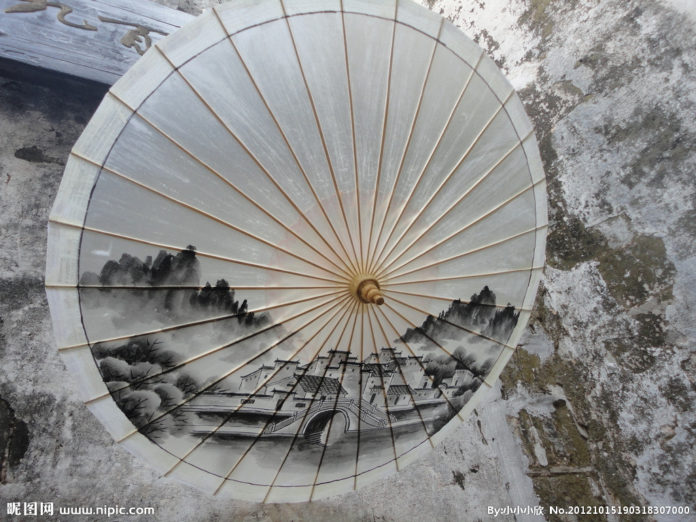 Traditional Chinese craft umbrella mainly refers to oil-paper umbrella. Traditional procedures of producing oil-paper umbrella are very complicated, all of which should be performed manually. It takes some 15 days of production period to produce an oil-paper umbrella, during which 81 procedures will be carried out, including haozhu (selecting bamboo), soaking bamboo (soaking in water), steaming bamboo (stewing in water), drying bamboo, crafting bamboo, carving bamboo, drilling bamboo, making a skeleton, threading, assembling, gluing paper onto the skeleton (paper is cut and glued onto the skeleton, and then trimmed and fixed), exposing to sunlight, painting (drawing pictures on the paper and making it dried), oiling (brushing the paper with boiled tung oil) and drying the umbrella. Patterns on Chinese oil-paper umbrellas feature the common themes of traditional Chinese paintings, such as flowers & birds and landscapes, as well as scenes of classical masterpieces including Dream of the Red Chamber and The Story of the Western Wing. The umbrella handle and skeleton maintain the original color of the material, creating a primitive appeal.

Well-preserved oil-paper workshops in China include Qinfeng Hanyue Oil-paper Umbrella and Ruoshuitang Oil-paper Umbrella. As a high level of craftsmanship is required when making an umbrella, artisans rely on their own skills and experience. Apprenticeship to learn umbrella making under a master takes three years. Currently there are no national or provincial masters in this area.